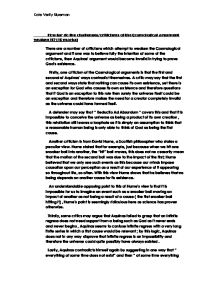 How far do the criticisms of the cosmological argument weaken it? (10 marks)

How far do the challenges/criticisms of the Cosmological argument weaken it? (10 marks) There are a number of criticisms which attempt to weaken the Cosmological argument and if one was to believe fully the intention of some of the criticisms, then Aquinas' argument would become invalid in trying to prove God's existence. Firstly, one criticism of the Cosmological arguments is that the first and second of Aquinas' ways contradict themselves. A critic may say that the first and second ways state that nothing can cause its own existence, yet there is an exception for God who causes its own existence and therefore questions that if God is an exception to this rule then surely the universe itself could be an exception and therefore makes the need for a creator completely invalid as the universe could have formed itself. ...read more.

With this view Hume shows that he believes that no being depends on another cause for its existence. An understandable opposing point to this of Hume's view is that it is impossible for us to imagine an event such as a snooker ball moving on impact of another as not being a result of a cause ( the first snooker ball hitting it) , Hume's point is seemingly ridiculous here as science has proven otherwise. Thirdly, some critics may argue that Aquinas failed to grasp that an infinite regress does not need support from a being such as God as it never ends and never begins , Aquinas seems to confuse infinite regress with a very long finite series in which a first cause would be relevant ; by this logic, Aquinas does not ...read more.

as humans are always reproducing and the population thrives without needing an ultimate being to resurrect "corrupted beings" as they do not all die out at the same time , it is a never ending cycle unless all humans become extinct at one time. To conclude, the criticisms of the Cosmological arguments go quite far to weaken the arguments, this is because , like the criticisms of the ontological arguments , such criticisms address the mostly Atheist view that God's existence is not necessary however , a determined theist would state that God is a necessity ( due to their beliefs). One criticism which is not very effective in weakening the Cosmological however, is that of Hume's which states causation is not existent, as this is illogical. ?? ?? ?? ?? Kate Verity Blueman ...read more.