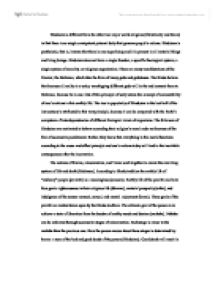 How is Hinduism different from the other two major world religions?

Hinduism is different from the other two major world religions (Christianity and Islam) in that there is no single omnipotent paternal deity that governs people's actions. Hinduism is pantheistic, that is, it states that there is one super being and it is present in all material things and living beings. Hinduism does not have a single founder, a specific theological system, a single system of morality, or religious organization. There are many manifestations of the Creator, the Brahman, which take the form of many gods and goddesses. The Hindu believe that because all reality is a unity, worshipping different gods will in the end connect them to Brahman, because he is one. Out of this principle of unity stems the concept of accountability of one's actions in this earthly life. ...read more.

These goals of the pravitti are looked down upon by the Hindu tradition. The ultimate goal of the person is to achieve a state of liberation from the burden of earthly needs and desires (moksha). Moksha can be achieved through successive stages of reincarnation. Each stage is closer to the moksha than the previous one. How the person moves about those stages is determined by karma: a sum of the bad and good deeds of the person (Hinduism). Good deeds will result in a rebirth to the higher, more spiritual level, and bad deeds can cause a person's soul to step down the ladder and may be even go as low to dwell in the body of an animal. The differences in wealth, health, social status are explained to be the natural outcomes of the one's previous lives (Robinson). ...read more.

The fifth class outside the four varnas are the "untouchables", the ones that are to low in their standings to be classified (India's Social Customs and Systems). The Hindu system of reincarnation works in the following way: a person realizes that life on earth is a burden of chaotic cycle of life and death. Life on earth is a suffering and is temporary. A person understands that he is confined to a certain caste in this life because of his actions in the previous lives. He or she than realizes that the goal of existence is liberation from this chaotic cycle of suffering. Knowing that the ultimate goal of his soul is to achieve total liberation, he or she will strive to lead a righteous life to achieve it. The achievement of the liberation is possible through moving up in the caste system. After physical death, the karma determines one's next position in the caste system on the way to moksha. ...read more.