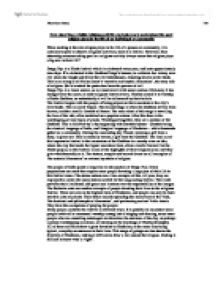 How observing a visible religious activity can help you to understand the part religion plays in the life of an individual or community When looking at the role religion plays in the life of a person or community, it is certainly helpful to observe religious activities, such as a festival. However, does observing someone taking part in a religious activity always mean that religion plays a big role in their life? Durga Puja is a Hindu festival which is celebrated every year, and lasts approximately nine days. It's celebrated in the Goddess Durga's honour, to celebrate her victory over evil when she fought and killed the evil Mahishasura, restoring heaven to the Gods. This is an example of Ninian Smart's 'narrative and mythic dimension', the story side of religion. She's invoked for protection from the powers of evil. Durga Puja is a visual source, so we must treat it with some caution. Obviously it has changed over the years, as most religious festivals have. Hindus created it to worship a Hindu Goddess, so undoubtedly it will be influenced by their beliefs. The festival begins with the people offering prayers to their ancestors at the city's river banks. This is called Tarpan. ...read more.

All of these activities show a great devotion to Hinduism, at the same time being typical, everyday occurrences in their lives. This range of goings-on also shows the diversity of Hinduism, making it difficult to draw a line around the religion. Making it difficult to know who is 'right'. The daily activities of Hindus are very specific, and play a big role in their lives. They get up before sunrise, and before they eat breakfast they must complete ritual washings, and pay homage to the family deity. This quite clearly shows that their religion has a big influence over their lives. They will then spend ten-fifteen minutes praying, meditating and reciting from the scriptures. Throughout the day they carry out their jobs with complete devotion, sincerity and honesty for the maintenance of their family. This is what Smart refers to as 'the practical and ritual dimension', the practices and rituals to which a religion adheres. Most other religions, regardless of their morning prayers or rituals, leave the house and their mind leaves their religion to focus on other, more pressing tasks. Hindus however, execute their day in accordance to their beliefs. In the evening, group prayers are performed in the family shrine, which is followed by supper and further homage to the family deity before retiring to bed. ...read more.

Another example of a festival that has strayed from its original meaning is Durga Puja. It was originally a very expensive holiday reserved for Lords, Rajas and businessmen. It involved venerable conch shells and drums, many animals were sacrificed, and Durga was the only deity worshipped. These days it has become a community festival, with a very diverse atmosphere. It's an excuse for extravaganza, with loud popular songs and the faces of the Goddess modelled on actresses. Most animal sacrifices have been abolished now, and Durga is now worshipped along with her family: Ganesha, Kartikeya and Shiva. This point of religious festivals deviating from their original meaning also ties in with my view that because a person is observed partaking in such an activity, one shouldn't jump to the conclusion that religion evidently plays a part in their life. Looking at all the evidence, it is very helpful to observe religious activities when trying to determine the part religion plays in the life of an individual or a community. However, making this observation doesn't always mean that religion plays a big role in their life. In conclusion, often, especially during a festival, it is the excitement of the situation and not the religion itself that is exhibited. Therefore observing such an activity isn't necessarily a direct reflection of the role religion plays in the lives of its followers. ...read more.