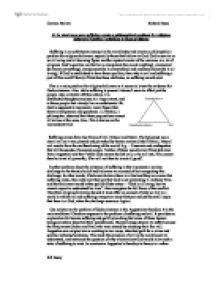 In what ways may suffering create a philosophical problem for religious believers? Outline 2 solutions to these problems

A) In what ways may suffering create a philosophical problem for religious believers? Outline 2 solutions to these problems Suffering is an unfortunate concept in the world today and creates a philosophical problem for religious believers, especially those that believe in God. God is seen to as an all loving and all knowing figure and the reputed creator of the universe in a lot of religions. God's qualities are that he is omnipotent (he can do anything), omniscient (he knows everything), omnipresent (he is everywhere) and omnibenevolent (he is all loving). If God is established to have these qualities, then why is evil and suffering a part of this world? Surely if God has these attributes, no suffering would exist. This is a main problem for religious believers as it seems to lower the evidence for Gods existence. Also, while suffering is present it doesn't seem to affect just the people, who are better off than others, it is distributed throughout society, to a large extent, and to those people that already live an unfortunate life. God is supposed to represent a moral figure that shows omnipotence and goodness. J.L Mackie, a philosopher, observed that these propositions cannot all be true at the same time. This is known as the inconsistent triad: Suffering comes from two forms of evil. Natural and Moral. ...read more.

In conclusion Augustine's theodicy in theory is a rather successful explanation and defence for the existence of evil however there are some criticisms in the theodicy as with every other belief. The Ireanean theodicy is another more modern approach to why suffering exists in the world and unlike Augustine, St Ireanaus claimed that man was created imperfectly, but was reaching to be perfect like God. God created the universe with possibility of evil and he would not intervene, as that would stop human free will. However, God is all loving, so eventually humans would develop into the image of God and live forever with him. The solution in this theodicy falls under the three responses to natural evil. One being, useful as a means to knowledge, meaning suffering can be useful as a basic means for staying alive, two, soul making, where a person can build upon their character and finally a predictable environment. As natural evil is inevitable it provides us with a stable and predictable environment. This theodicy is seen as a popular answer to the Problem of Evil from a Christian point of view. This is because it gives a reason for pain and also, it gives hope. St Augustine's theodicy also deals with the Problem of Evil, but it is not as popular as an answer, since many people see it as giving no hope. ...read more.

Evil exists, but it is very close to his upbringing. To him it's the indifference that is primarily offensive. Ivan notes that those who do not believe in God but strive to accomplish "the transformation of all humanity on a new pattern" turn the religious idea of salvation inside out. In other words anarchism and socialism are just a reversed glove of Christian Kingdom of Heaven. Again the problem of evidence arises. There is not sufficient evidence to explain whether the existence of God is probable or not. Where as the logical side seems easier to take on board. There is clearly evil in the world so either God does not exist or there is no evil in the world. Or If God and evil are to exist at the same time, then God must have a very good reason for permitting evil to exist. (Could be some points mentioned in the theodices). In conclusion the solutions can be successful to some extent that you do believe in God. However, now that scientific evidence for evolution and astrology has become more popular and believable, the theory of God being the creator of the world may be left in the dark. If solid evidence could be produced for the existence of suffering and God then the theodices would proof to be a lot more successful as many more people could easily agree. Carmen Barlow Richard Dunn R.S Essay ...read more.