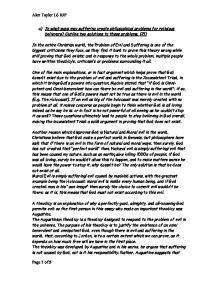 In what ways may suffering create philosophical problems for religious believers? Outline two solutions to these problems.

a) In what ways may suffering create philosophical problems for religious believers? Outline two solutions to these problems. (21) In the entire Christian world, the Problem of Evil and Suffering is one of the biggest criticisms they face, as they find it hard to prove this theory wrong while still proving that God exists; and in response to the whole problem, multiple people have written theodicy's, criticism's or problems surrounding it all. One of the main explanations, or in fact argument which helps prove that God doesn't exist due to the problem of evil and suffering is the Inconsistent Triad, in which it brings God's powers into question. Mackie stated that "if God is Omni-potent and Omni-benevolent how can there be evil and suffering in the world"; if so, this means that one of God's powers must not be true as there is evil in the world (E.g. The Holocaust). If an evil as big of the holocaust was merely created with no problem at all, it raises concerns as people begin to think whether God is all loving indeed as he say he is; or in fact is he not powerful at all seeing as he couldn't stop it as well? These questions ultimately lead to people to stop believing in God overall, making the inconsistent Triad a solid argument in proving that God does not exist. ...read more.

Irenaeus, according to Jones, we don't know what this perfection is yet until we reach good, and according to Jordan, this is in the afterlife, so when we reach heaven. Irenaeus also believed God was partly responsible for the evil in the world, because Irenaeus believed humans had been created in God's' image' but were eventually developing into God's likeness. In addition, Irenaeus sees evil and suffering as a means of knowledge; as knowledge of pain prompts humans to seek to help others in pain. Also, it allows for character-building, as evil offers the opportunity for humans to grow morally, as if we were programmed to 'do the right thing' all the time there would be no moral value to our actions, which would mean we would never learn the art of goodness in a world designed as a complete world. However Augustine's Theodicy differs from the Irenaean theodicy as well, in which evil comes from and its purpose in this world; the Irenaean theodicy has suggested that evil comes from God in order to allow humans to develop morally and also spiritually, but there is some contrast with process theology too: process theologians suggest that God is not omnipotent, while Augustine argue that he is. Finally, the theodicy differs from Plantinga's free will defence, as Plantinga tries to solve the logical problem of evil, while Augustine is considering the evidential problem of evil. ...read more.

However, just as there is strengths with Irenaeus' theodicy, there are weaknesses to it as well; for example there are problems with the concept of `heaven for all` 1. The concept of `heaven for all` seems unjust: it places too much emphasis on God's love and not enough on God's justice. 2. The concept of `heaven for all` also creates logical problems for Irenaeus` theodicy. Where is the incentive to `develop into God's likeness` if you know everyone is to be rewarded with heaven? Problems with the quantity and seriousness of suffering in the world Irenaeus` theodicy shows how the process of soul-making requires the existence of some suffering in the world. Nevertheless, why is there so much suffering? Many would argue that the quantity and gravity of suffering in the world is Very unacceptable. Problems with the idea that any suffering is needed in the world Irenaeus` theodicy rests on the assumption that suffering is good for humans: that God allows suffering to exist in order to help people develop into his likeness. This idea that suffering can be seen as an expression of God's love has been challenged by D. Z. Phillips. Overall, in my opinion, even though both arguments are flawed in their different ways, I think that the Irenaeus argument is much better solution suited for evil and suffering, as not only is it more modern, it presents more logical reasons than Augustine did instead. ?? ?? ?? ?? Alex Taylor L6 RJP Page 1 of 5 ...read more.