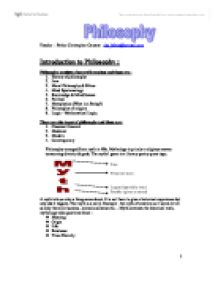 Teacher : Father Christopher Caruana chc_bfrais@hotmail.com Introduction to Philosophy : Philosophy consists of several branches and these are : 1. History of philosophy 2. Law 3. Moral Philosophy & Ethics 4. Mind Epistemology 5. Knowledge & Mind Senses 6. Political 7. Metaphysics (What is a Being?) 8. Philosophy of religion 9. Logic - Mathematical Logic. There are also types of philosophy and these are: 1. Classical /Ancient 2. Medieval 3. Modern 4. Contemporary Philosophy emerged from myth in 6Bc. Mythology is primly a religious answer concerning divinity & gods. The myths' genre is a literary poetry prose type. A myth tells us why a thing came about. It is not there to give a historical experience but why did it happen. The myth is a story. Example : the myth of creation as it wants to tell us why there are humans , animals universe etc... Myth contrasts the historical truth, mythology asks questions about : * Meaning * Origin * Life * Existence * Time /Eternity Homer Hesoid and Vergil --> The first one was a poet who tried to answer the question about how the world came about. The 3 Milesians Philosophers: Thales of Miletus Anaximander Anaximenes Tried to explain that the world came from water Thought that the infinite made the universe Thought that everything came from air /fumes. Concepts in Philosophy: Nomos --> Which means convention, laws, norms Phusis --> Which means Nature Anamimander and Anaximenes came up with the distinction between the two. Logos --> Means word & reason Arch� --> Means beginning, the dimenic principal of every start, creative source. Example: God. Nature --> character with you form birth Nature --> Character builds up. The difference between RHETORIC & PHILOSOPHY The science of persuasion The science Example: in politics of reason This is an issue between Sophists & Plato. The first one was convinced that rhetoric was better than philosophy as it would get them far ahead in life. ...read more.

Moral Philosophy 2. Intellectual Ethics 3. Moral Optimism Virtue is knowledge. If you have an intellectual awarness one's life is good and actions will be just. SUMMARY Pre-Socratics Identity and change, universe and cosmos Sophists Shifted attentions to teaching Socrates Focus on humanity Plato Synthesis of Cosmological matters, metaphysics, identity, being and ethical questions. His answer is the THEORY OF IDEAS. 427-347Bc > Was a follower of Socrates and was greatly influenced by him. > Was invited to Sicily by Dionysus 1 and 11. Plato's idea was that the best ruler of a country should also be a philosopher. This is why he was invited by these 2 kings. > HIS DIALOGUES: Early Dialogue > Here he was under a great influence of Socrates. > He wrote 3 dialogues: > Apology --> Describes Socrates trial. He was accused of corruption of young ones which wasn't true. > Crito --> Says why Socrates decided to remain faithful to the law > Phaedo --> witness Socrates last few words before he is killed and he was defending the immortality of the soul. > Theory of Knowledge : epistemology. Dualism is present in Plato's explanations. He uses Dialetic from induction --> This means that he builds a universal theory from experiences, appearances and examples. > His dialogues guide us from one fact to another and they don't have a specific END. > There is difference between EPISTEMA AND DOKSA. Epistema is the true believe while Doksa is the opinion / common believe. Sense- perception Ideas/ Essences > With this sense one only sees the apparent world > The soul goes beyond the apparent world > Appearance do not show the truth but suggest that there is something beneath them > This means one sees the essence & it makes a thing what it is not only by its appearance. > The truth of opinion and we can't base on them > The real truth for Plato and the ultimate kind of knowledge. ...read more.

Reason is there to reinforce this system & not to question. Education is there to form a uniform system and late on one that passes to conformity. By education one learns to except the values of society and reinforce them not go against them. > REASON --> GUARDIANS SPIRT --> AUXILARIES. DESIRE --> WORKLING CLASS. Each class has one-third of the soul but one can say that the have all 3 but for example desire is more present in the working class. > Totalitarian --> a state where the common good is superior to the individual good. Plato believed in this type pf state. The guardians are educated and have greater knowledge so they decide what the common good is. If one does not fulfill his work he becomes meaningless to society. > Plato is the 1st to propose activities in education. He assumes that education is perfect. > Is Plato's system paternalistic? Paternalism is one who imposes a decision on another person. He decides what is the good for the other person without leaving space for the other to decide on his own. Plato thinks that the working class are not capable of deciding what the common good is for them so they need the Guardians, The guardians represent the laws& so he does not mention laws in his dialogue. Later on in another dialogue laws are mentioned. > Role of the arts : (poetry drama and literature ) Arts were part of the culture so Plato discussed this issue. He distinghes between : 1) GOOD POETRY --> this involves narration where one tells his own experiences. 2) BAD POETRY --> Imitaion. When you assume and take another person's character. IT also involves images. It also involves other people's experiences. > Conception Scheme of Plato's Political Theory : > Role of Education : 1) Conformity 2) Harmony 3) Uniformity > The Guardians : 1) Have no propert 2) have power 3) share wives and children > Working class : 1) have property 2) no power 13 1 ...read more.