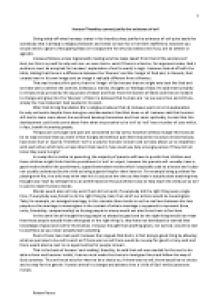 ﻿Irenaen Theodicy cannot justify the existence of evil Going solely off what Irenaeus states in his theodicy does justify the existence of evil quite easily for somebody that is already a religious follower and needs to have his or her faith reaffirmed, however you would need to ignore a few glaring flaws in his argument for why God allows evil if you are an atheist or agnostic. Irenaeus follows a clear logical path making very few leaps (apart from that of the existence of God, but this is a proof for why evil can ?or even has to- exist if there is a God so, for arguments sake, God?s existence must be accepted for Irenaeus? explanation of evil to work) in logic. Irenaeus started off with the bible, stating that there is a difference between the ?likeness? and the ?image? of God and, in Genesis, God created man in his own image and an image is radically different from a likeness. That was Irenaeus first point, that the ?image? of God means that we might only look like God and we have yet to achieve the content, behaviour, morals, thoughts or feelings of God. ...read more.

Morals would also not truly exist if evil did not exist; if everybody did the right thing every single time, if everybody was forced to do the right thing by God, then all of our actions would be meaningless. Take, for example, an arranged marriage; in this scenario there tends to not be real love between the two people so the marriage is meaningless in the context of what a marriage is supposed to represent (love, unity, friendship, companionship) as forcing people to marry would not also force them to feel love. In the same line of thought forcing people to always be good and do the right thing would not mean that those people actually know what good or the right thing is, they have not developed or earned that knowledge of good and evil for themselves. Irenaeus thought that anything given, not earned, would be next to worthless as you never actually learn anything. Due to those two main point Irenaeus then argued that God is in fact doing a good thing by allowing what we perceive to be evil to exist as if there was no evil there would be no way for good to truly exist and there would also be next to no opportunities for people to learn. ...read more.

At the very least the amount of ?evil? and suffering in the world could be lowered or, as Swinburne argued, we could learn through pleasure more than through pain. As with the example before of learning about when to eat through hunger surely we could have learned when to eat from the pleasure of being full and the lack of pleasure when we are hungry or pleasure for committing good acts and a lack of pleasure for committing crimes or immoral acts. Irenaeus also believed that everybody will go to heaven at some point; personally I believe that this could make sense if Irenaeus also said that ?if you fail to get into heaven the first time- you are sent to retry life and you continue to retry life until you have learned from your mistakes. Alas Irenaeus in fact said that anything akin to reincarnation was ?absurd? and he instead believed in hell which, going off of his previous points, I believe is self-contradictory as hell would only offer a punishment and no true opportunity to learn from your mistakes. In conclusion Irenaen theodicy can justify the existence of evil easily to religious followers however it runs into problems when people begin to question the existence or power of God. Robert Rosca ...read more.