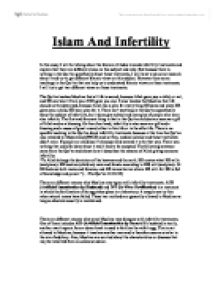 Islam And Infertility In this essay I will be talking about the Islamic attitudes towards infertility treatments and explain that there are different views on this subject and why. But because there is nothing in the Qur'an specifically about these treatments, I will have to do some research about it and try to get different Islamic views on this subject. However there some teachings in the Qur'an that can help us to understand Islamic views on these treatments. I will try to get two different views on these treatments. The Qur'an teaches Muslims that all life is sacred, because Allah gave you a child, or not, and HE can take it from you if HE gave you one. It also teaches the Muslims that life should not be destroyed, because Allah has a plan for every thing HE does and when HE gives you a child, HE has a plan for it. There isn't anything in the Qur'an specifically about the subject of infertility, but it does give advice and examples of people who were also infertile. ...read more.

A couple can try this when natural means have failed. These two methods are generally allowed to Muslims as long as absolute security is maintained. There are different reasons why some Muslims may disagree with infertility treatments. One of these includes AID-(Artificial Insemination by Donor) If a husband is sterile, another man's sperm from a donor bank is used to fertilize the wife's egg. This is not allowed to Muslims, because it involves another man and is therefore seen as similar to the sin of adultery. Also, Muslims are worried about the characteristics or diseases that may be inherited from an unknown donor. Surrogacy is another process which might be disagreed upon by some Muslims. This is a form of parenting which happens when a woman is paid to carry and give birth to a child on behalf of a woman unable to become pregnant herself. The husband's sperm will be used to fertilize the egg of the wife or, if necessary, the egg of the other woman. It is then transferred to the surrogate mother who agrees to hand over the child to the parents when it is born. ...read more.

(Statement from the Islamic Shari'ah Council of Britain published in 'What does Islam say, Ibrahim Hewitt') If the semen of a man is placed in an artificial womb ... the action is permissible and ... all orders applicable to a father and child will be applicable to them ... Making the semen of a husband reach the womb of his wife artificially is permissible and the child thus born is like all other children. (Articles of Islamic Acts, Imam Al-Khoei.) So basically, there are opinions on this subject that differ but in the end they all agree on the same thing: In Islam AIH (Artificial Insemination by Husband) and IVF (In-Vitro Fertilization) are allowed by the Islamic Shari'ah, because of the fact that both processes involve the sperm and the egg of the legal parents and is carried and born by the legal mother. But AID (Artificial Insemination by Donor) and Surrogacy are not allowed of the Shari'ah, because they involve the use of a third party which is considered as adultery. I believe that this is correct because I was raised to believe this and it makes sense to me why it's allowed or disallowed. By: Hamza Abib 11MJB ...read more.