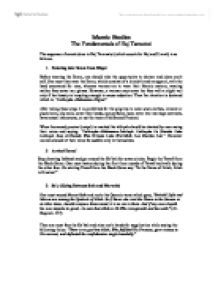 Islamic Studies The Fundamentals of Haj Tamattui The sequence of events done in Haj Tammatui (which counts for Haj and Umrah) is as follows: 1. Entering into Ihram from Miqat Before wearing the Ihram, one should take the opportunity to shower and clean one's self. One must then wear the Ihram, which consists of a loincloth and an apparel, with the head uncovered for men, whereas women are to wear their Islamic custom, wearing neither face cover nor gloves. However, a woman may cover her face with a slight veil only if her beauty is tempting enough to cause seduction. Then the intention is declared which is: "Labbayka-Allahumma-Hajjan" After taking these steps it is prohibited for the pilgrims to wear sewn clothes, remove or pluck hairs, clip nails, cover their heads, use perfume, hunt, enter into marriage contracts, have sexual intercourse, or cut the trees of the Sacred Precinct. When the sacred precinct (miqat) is reached the talbiyah should be chanted by men rasing their voice and saying: "Labbayka-Allahumma-Labbayk. Labbayka La Sharika Laka Labbayk. Inna Al-Hamda Wan-Ni`mata Laka Wal-Mulk. Laa Sharika Lak." However women should let their voice be audible only to themselves. ...read more.

and `Asr (afternoon) Prayers together shortened at the time of Zuhr. In this case, one Azan (Prayer Call) is made and two Iqamah. It is necessary to be within the borderlines of `Arafat, but it is not necessary to ascend Jabal Ar-Rahmah. At the sunset, one must go Muzdalifah very calm and peacefully, chanting Labbayk throughout the way. 6. Spending the Night at Muzdalifah: One must collect 7 pebbles to throw them on the first day of `Eid Al-Adha, and 21 for the second day, and another 21 for the third day, so that the number of all the pebbles would be 49. Before the sunrise, one must go to Mina to throw the pebbles there. One must wk in calmness and keep on chanting the talbiyah throughout the way 7. On the 10th of Dhul-Hijjah: On reaching Mina, one must perform the ritual of throwing the stones (pebbles) of Al-`Aqabah successively, one after the other and stop chanting Labbayk on reaching Al-`Aqabah, and celebrate Allah's Greatness (by saying "Allah Akbar"!) with each stone you throw. 8. Shaving or Haircut: After throwing the stones at Al-`Aqabah, men should have their hair cut or shaven altogether, whereas women have to cut part of their hair equal to a finger's tip. ...read more.

While throwing the stones at the three Jamarat it is commendable, first, to make the smaller one between you and the Qiblah (Prayer Direction); second, to proceed to the middle one, facing Qiblah and supplicate Allah for a long time and then throw the stones; finally, to proceed to the greater Jamarat, putting Qiblah to your left and Mina to your right and throw the stones. 13. The 12th of Dhul-Hijjah: Spending the Night at Mina During the Days of Tashreeq Make use of the period before zenith by doing good deeds, helping others and remembering Allah, and after zenith throw the stones at the three Jamarat, exactly as you did on the previous day, and with the same order. After this one can go before the time of sunset, but it is better to stay at Mina till the following day. 14. The 13th of Dhul-Hijjah: Throwing the Pebbles One must throw the stones at the three Jamarat in the afternoon, exactly as you did on the last two days. 15. Tawaf Al-Wada` (Farewell Circumambulation Around the Ka`bah) When one intends to go home, one must go to Makkah and make Farewell Tawaf around the Ka`bah. After the accomplishment of the mentioned actions in order one obtains Hajj Tamatuii, which is a Haj and an Umrah. Its well worth it! By Hassan Al-Wakeel ...read more.