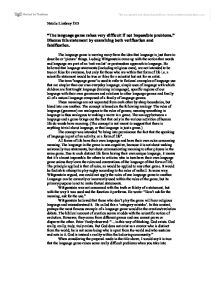 “The language game raises very difficult if not impossible problems.” Discuss this statement by examining both verification and falsification.

The language game is moving away from the idea that language is just there to describe or ‘picture’ things. Ludwig Wittgenstein came up with the notion that words and language are part of an ‘anti-realist’ or postmodern approach to language. He believed that language statements (including religious ones), are not intended to be true or false for everyone, but only for those who are within that form of life i.e. a scientific statement would be true or false for a scientist but not for an artist.

These meanings are not separated from each other by sharp boundaries, but blend into one another. The concept is based on the following analogy: The rules of language (grammar) are analogous to the rules of games; meaning something in language is thus analogous to making a move in a game. The analogy between a language and a game brings out the fact that only in the various activities of human life do words have meaning. (The concept is not meant to suggest that there is anything trivial about language, or that language is just a game.)

The concept was intended "to bring into prominence the fact that the speaking of language is part of an activity, or a form of life".

All forms of life have their own language and have their own rules concerning meaning. The language in the game is non-cognitive, because it is not about making universally true statements, but about communicating meaning to other players in the same game. Due to each distinct life form having their own unique language, it means that it’s almost impossible for others to criticize who in turn have their own language game unless they learn the rules and conventions of the language of that form of life. The principle applied is that of rules, as would be applied to any other game. It would be foolish to attempt to play rugby according to the rules of netball. In same way, Wittgenstein argued, one could not apply the rules of one language game to another. Language can be correctly or incorrectly used within the rules of the game, but its primary purpose is not to make factual statements.

Wittgenstein was not concerned with the truth or falsity of a statement, but with the way it was used and the function it performs. He wrote: “Don’t ask for the meaning, ask for the use.”

Wittgenstein believed that those who don’t play the game will hear religious language and misunderstand it.  He called this a ‘category mistake’. In this context, perhaps the most famous example of a language game would be the creation/evolution debate. The biblical account of creation seems at odds with the scientific notion of evolution. However, they come from different games and one cannot prove or disprove the other. Peter Vardy observed: “…in this way of thinking, God exists. God really, really, truly, truly exists. But God does not exist as a creator who is distinct from the world; he is not some being who is apart from the world and who sustains and acts in it. God is instead a reality within the believing community.”

When considering the proposal made in the title above, I would say it is true that the language game raises some really difficult problems when you take into account that language games do not allow believers’ claims to be empirically tested. Also religious language alienates those outside the game, meaning that those who don’t understand or have not yet learnt the rules, will misunderstand what is trying to be said. Furthermore the rules of the games cannot be changed to allow outsiders in which could be seen as unfair.

It is also possible that the language game theory is nothing more than a compromise. The aim of the principle is to avoid the problems in making religious claims which intend to make factual claims, but even though religious language clearly does use non-cognitive forms, many believers would not be prepared to say that all religious language is non-cognitive. It doesn’t require a believer to argue that their assertion ‘God exists’, or ‘God loves me’, is meant to be more that a symbolic statement or an ethical claim about their lifestyle. God may be transcendent, but for the believer he is also experienced in the real world, and there is cognitive meaning in their claims about him.

However in some respects the statement doesn’t reflect the truth when you think about the fact that it highlights the non-cognitive nature of religious language. It distinguishes it from other types of language, making it become more unique. Also language games provide boundaries for the correct use of language and believers can be initiated into the rules of language. Finally language games defend language against criticisms from other ‘forms of life’, since truth is understood as relative and statements are to be judged against their context and no on whether they are inherently or objectively true or false.

So the language game theory may not be entirely acceptable to believers, and neither does it necessarily satisfy the disbeliever. The claim that no language game can be criticised by someone from outside the same language game, assumes that all statements are equally valid. Wittgenstein rejected the idea that what a word means depends on the way the world is. He claimed instead that meaning depends on what we are prepared to count as meaningful and he appealed to an analogy with games and their rules to make a point.