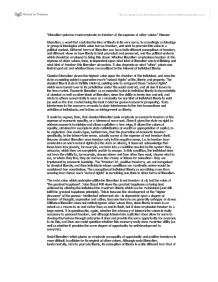 &quot;Liberalism puts too much emphasis on freedom at the expense of other values.&quot; Discuss

"Liberalism puts too much emphasis on freedom at the expense of other values." Discuss Liberalism, a word that contains the idea of liberty in its very name, is accordingly an ideology or group of ideologies which value human freedom, and seek to promote this value in a political context. Different forms of liberalism can have both different conceptions of freedom, and different views on how liberty is best promoted and preserved, and the political systems which should be employed to bring this about. Whether liberalism emphasises freedom at the expense of other values, then, is dependent upon what kind of liberalism one is criticising and what kind of freedom this liberalism advocates. It also depends on what "other" values one finds important and whether these are sacrificed in the interest of individual liberty. Classical Liberalism places the highest value upon the freedom of the individual, and sees the state as existing solely to guarantee man's "natural rights" of life, liberty and property. ...read more.

The "freedom to", positive freedoms, are not recognised by classical liberals, and thus individuals whose conditions are manifestly unfree would be considered free nonetheless. The conception of individual liberty as something more than securing from threat one's "natural rights" is something one finds in other forms of liberalism. The main value which underpins utilitarian liberalism is not freedom at all, but the value of "the greatest happiness". John Stuart Mill views the greatest happiness as being best achieved by allowing the individual the maximum liberty which can be maintained (and still fulfil the greatest happiness principle). This is because the development of the "higher pleasures" of the person - intellectual refinement etc - is dependent upon a degree of freedom of thought, expression and action, because humans are generally unhappy as slaves. Utilitarian liberalism does not entirely ignore other values then, since liberty is seen to an extent as a means to an end rather than an end in itself, but it does emphasise freedom to a large extent. ...read more.

In addition, every form of liberalism aims to maximise freedom in some sense, and there are still a diverse range of methods for obtaining it. This is because, as we have seen, there are different views on what actually constitutes freedom: whether it is merely the absence of a constraint by the state, or whether it involves informal social and economic relationships. Freedom could be constructed from a set of different values - equality, security and order, opportunity to develop oneself and share thoughts and experiences with others, participation in the government of oneself and one's society. Although liberalism as a whole tends to take the individual out of social contexts and above humanity on the social level, the value of freedom, and thus some kind of liberalism (most probably a social liberalism, rather than classical liberalism which from today's perspective could be seen as harsh) can be a coherent and just combination of various ideals for the construction of a just society which maintains the integrity and rights of the person. ...read more.