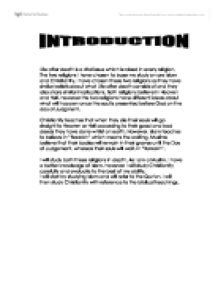 Life after death - Islam and Christianity

Life after death is a vital issue which is raised in every religion. The two religions I have chosen to base my study on are Islam and Christianity. I have chosen these two religions as they have similar beliefs about what Life after death consists of and they also share similar implications. Both religions believe in Heaven and Hell, however the two religions have different ideas about what will happen once the soul is presented before God on the day of Judgment. Christianity teaches that when they die their souls will go straight to Heaven or Hell according to their good and bad deeds they have done whilst on earth. However, Islam teaches to believe in "Barzakh" which means the waiting. Muslims believe that their bodies will remain in their graves until the Day of Judgement, whereas their souls will wait, in "Barzakh". I will study both these religions in depth. As I am a Muslim, I have a better knowledge of Islam, however I will study Christianity carefully and evaluate to the best of my ability. I will start by studying Islam and will refer to the Qur'an. I will then study Christianity with reference to the biblical teachings. Islam is complete way of life. It is the guidance which has been provided for Muslims by Allah, the creator of all things. Muslims believe that everyone is born Muslim and the people who believe in other religions are converted to that religion and when or if they become Muslim they are reverting to Islam, which means they are coming back to Islam. Islam has five pillars, which can be described as the foundation stones upon which the religion is based, * Shahadah, which is the decleration of faith * Salah, which are the five compulsory daily prayers * Sawm, which is fasting during the month of Ramadan * Zakah, which is a welfare contribution * Hajj, which is the pilgrimage to Makkah. The Shahadah is the most important of all the pillars. ...read more.

Allah has promised all Muslims heaven how have been faithful to Allah and his prophet, the Qur'an says. "This is the similitude of Jannah which the Allah fearing have been promised: therein are rivers of water unstaling, rivers of milk unchanging in flavour and rivers of wine- a delight to the drinkers, rivers, too, of honey purified; and therein for them is every fruit, and forgiveness from their Lord." Heaven is only the positive side of life after death, there is a place for people who took advantage of others and people who used there jurisdiction instead of Allah's a place called Jahannam (Hell). Muslims believe in Jahannam as a place of no mercy, it is a place were your worst nightmare comes true, a place made out of fire and hot lava that no physical body can take. I am a Muslim and my parents always told me if I do bad things like steal I will be forbidden to from Janna and sent to (Jahannam) were my soul will suffer and be killed hundreds of times. So Jahannam is the consequence of what we do in this life that is why the Quran says sacrifice this short journey for the next eternal life. Death, it is only the beging not the end and what we get in the next life depends on what we do. When we die our feet, tongs, fingers will testify for the deeds we have committed and the angels on our shoulders will open up the book "this is your life" in front of us not in front of Allah because Allah is all knowing and Allah will judge us whether we go to heaven or hell. The Quran says. "On the day when their tongues, their hands and their feet shall testify against them touching that they were doing. Upon that day Allah will pay them in full their just due, and they shall know that Allah is the manifest Truth." ...read more.

Death is only a transformation from here now to the here after. The difference in Islam about the belief in life after death is that, Islam believes that when you go to your grave you stay in a state of "Barzakh". Barzakh is the waiting in the grave for the trumpets to blow and all mankind will be judged. In Christianity you go straight to heaven hell or a state of Purgatory depending on your good and bad actions in life on earth, if you feeds the poor, act on what your mother or farther say and do all the good things then you will be rewarded with heaven. If you do bad things like murder, rape, be curl to people all the moral things then you get hell, it is same as Islam. The difference is the basic beliefs in these two religions, in Islam basic beliefs are believing in Allah the only God, Angels of Allah, the books, messengers, the day of judgement, and life after death. Christianity also gives a belief in life after death a belief in heaven and hell. The Difference is that in Christianity you have to believe in Jesus, who they declare as the saviour and Son of God who died on the cross for everyone's sins. Also teaches us to believe in one god, which Islam teaches too. Christianity teaches the trinity, beliefs in the father, the son, and the Holy Ghost. These facts clearly say that there is not much of difference in Islam and Christianity. I think the most important point in to believe in one god and one god only; it is the faith that keeps people together and fear from god. Islam and Christianity both have same basic beliefs in life after death and they both lead to the same conclusion, which is to have faith and do good things and be mature about the steps you take in life. The bit that survives death is your soul and the physical resurrection. Physical resurrection is when you will be raised from dead on the judgement day. ...read more.