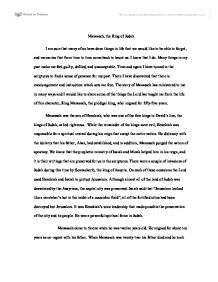 Manasseh, the King of Judah

Manasseh, the King of Judah I am sure that many of us have done things in life that we would like to be able to forget; and memories that from time to time come back to haunt us. I know that I do. Many things in my past make me feel guilty, defiled, and unacceptable. Time and again I have turned to the scriptures to find a sense of penance for my past. There I have discovered that there is encouragement and instruction which sets me free. The story of Manasseh has ministered to me in many ways and I would like to share some of the things the Lord has taught me from the life of this character, King Manasseh, the prodigal king, who reigned for fifty-five years. Manasseh was the son of Hezekiah, who was one of the few kings in David's line, the kings of Judah, called righteous. While the remainder of the kings were evil, Hezekiah was responsible for a spiritual revival during his reign that swept the entire nation. He did away with the idolatry that his father, Ahaz, had established, and in addition, Manasseh purged the nation of apostasy. We know that the prophetic ministry of Isaiah and Micah helped him in his reign, and it is their writings that are preserved for us in the scriptures. There were a couple of invasions of Judah during this time by Sennacherib, the king of Assyria. ...read more.

The father of Hezekiah was Ahaz. Ahaz had built these high places, groves on the tops of hills throughout Judah where idols were worshiped. Hezekiah had destroyed them all. Manasseh built them again. He built altars to foreign gods in the temple itself, and in the holy place where the priest worshiped. Manasseh took all of the phallic symbols, the monuments he had built in honor of the goddess of sex, and he put them in the Holy of Holies, in the place where the Spirit of God dwelt. It was because of the sins that Manasseh committed that the nation of Judah was taken captive. Only fifty years after Manasseh's death the nation went into the Babylonian captivity. There are a couple of additional things I would like for you to note. First, Manasseh obviously was a wicked man. He was perhaps the most wicked king that ever reigned in Judah. Manasseh did things which no other king had ever done before. He also led Judah into doing things which no nation had ever done before. Secondly, observe the procedure that the Lord undertakes in order to reclaim his man. God loved Manasseh, and because he loved him he would not let him continue to live in rebellion. God first spoke very quietly to Manasseh, and as Manasseh began to indulge in the idolatrous practices; God said, "Manasseh, Jerusalem is where my name is placed." ...read more.

Isn't that strange? He reigned longer than any other king in the history of Israel or Judah. Didn't you see, God? Weren't you aware of what was going on? Can a person really live that way and get away with it?" Manasseh was notorious in Israel. He was an evil, wicked man. And yet God reestablished him on his throne. He was fully forgiven. He lived in power and authority throughout the rest of his years. Do you know what Manasseh's name means in Hebrew? "Forgotten." That is the name that God writes over you sordid past. Your sins are forgotten. Every time your past comes back to haunt you, and you say to God, "There, Lord, I have done it again," do you know what the Lord says to you? He says, "You've done what? I do not even remember!" He has forgotten. You can read God's word in Hebrews 10:16-18(New Living Translation): "This is the new covenant I will make with my people on that day, says the Lord: I will put my laws in their hearts, and I will write them on their minds." The he says, "I will never again remember their sins and lawless deeds." And when sins have been forgiven, there is no need to offer any more sacrifices. I thank you for the complete forgiveness, Lord, and for the freedom to serve you because we know that we are at peace with you. ...read more.