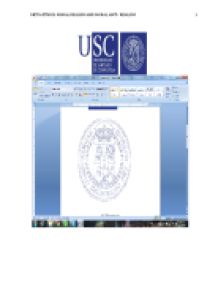 Meta- ethics is a branch of ethics that is mostly about the question Whats goodness? and How do we define what is good and what is bad?

﻿META-ETHICS: MORAL REALISM AND MORAL ANTI- REALISM Ali Hamrayev Introduction to Ethics Essay on topic: Meta- ethics: Moral Realism and Moral Anti- Realism Date: 20.11.2012 Professor: Oscar Horta Alvarez Essay Outline 1. Introduction: What Meta- Ethics is all about? 2. The Concept of Moral Realism 1. Components of Moral Realism 1. Objective 2. Cognitive 3. Metaphysical 1. Categories of Moral Realists 1. Theistic 2. Naturalistic 3. No naturalistic 1. The Concept of Moral Anti- Realism 1. Components of Moral Anti- Realism 1. Moral Noncognitivism 2. Moral Error Theory 3. Moral Subjectivism 1. Conclusion Introduction So, what does the ?Meta- ethics? mean and what is it all about? To be familiar with and understand better the ethical statements, properties, attitudes, and judgments, in philosophy there?s a component of ethics called meta- ethics. Being generally recognized by philosophers, meta- ethics is one of three wings of ethics, which are: 1. Meta- ethics, 2. Normative ethics, 3. Applied ethics. Meta- ethics is a branch of ethics that is mostly about the question ?What?s goodness?? and ?How do we define what is good and what is bad?? at the same time aiming to understand the nature of ethical properties and evaluations, while the other branch of ethics- Normative ethics answers mostly to the question ?What should one do??. ...read more.

that can be evaluated as either true or false, and about which through thinking about the situation you can determine or differ a ?right? from ?wrong?. One of the professors of the Hankuk University, Shin Kim, says: Cognitivism is the view that moral judgments are cognitive states just like ordinary beliefs. It is part of their function to describe the world accurately. And the last element of moral realism is ?Metaphysical Element?. Relying on this element we can derive that moral facts exist in reality but they exist beyond what we can observe with our immediate senses and this is done mostly in a logic-based way on meaning of terms rather than perceptions or observations. Coming to the categories of Moral Realists, according to John Hoffman of Arcadia University, there are three categories: Theistic, Naturalistic, and No naturalistic. Categories of Moral Realists Theistic moral realists believe that moral values exist within God; they believe that morality depends on God?s will or reason, that God?s will is an objective fact within the universe. As an example for this category we can take the ?Religious Ethics?. ...read more.

Moral Subjectivism is a view that states that moral judgments follow on to the subjective states. For instance, ?stealing is wrong? wouldn?t associate positively with a person who doesn?t like robberies and therefore this statement would be ?true? for him, whereas to a person who likes stealing this statement would be rather ?false?. When we give arguments for a moral position, we often think other people should agree with us because morality is ?not just a matter of taste.? If subjectivism is true, then moral disagreement would be impossible, and moral justification would plausibly be irrational. Conclusion Concluding my essay, I would like to say that now having read different sources about meta- ethics I have a clear idea what it is about and have an answer to my main question of the essay- ?What does the ?Meta- ethics? mean and what is it all about?? To understand the concept of Meta- ethics I have used some sources from different educational institutions and sites. Being finished with section of Meta- ethics now I can proceed to the second branch of ethics- Normative Ethics. ...read more.