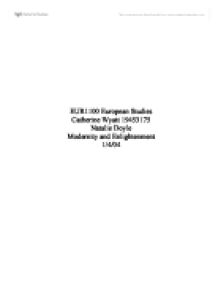 EUR1100 European Studies Catherine Wyatt 19453175 Natalie Doyle Modernity and Enlightenment 1/4/04 The Persian Letters (1721), a fictional piece by Charles Montesquieu, is representative of 'the Enlightenment,' both supporting and showing conflict with its ideas. The initial perception of European people, in particular the French, is of a busy people with goals and ambition whose focus is progress; in this way they are able to gain knowledge - a core foundation to Enlightenment. One particular section of the Persian Letters states that the revolt against the authorities was lead by women, who through reason, saw the inequity of their treatment and formed a voice. In Montesquieu's story, their decision to change tradition was part of a powerful movement towards this new found 'light'. The pressure for people to conform was greatly impressed by the King. With the Enlightenment movement, came recognition of this and a rebellion of what Montesquieu calls, the King's "invisible enemies" formed. These were people trying to break the mold and think for themselves, using reason and searching for answers outside what they had been told to believe. ...read more.

As the focus of Enlightenment was on the natural law and order of the world, religious beliefs and especially Christian theology were a central topic. People of this age were trying to simplify common day human laws back to nature as it provided 'the basic metaphor' for how mankind should live. In Letter 24 of 'Les letters persanes,' Rica's perception of the French at this time, was of a people keen to find answers-and willing to work for them. Their hustle and bustle is the result of experiences which were critical in advancing towards Enlightenment and Rica's example demonstrated that these people were more than capable of putting in considerable effort. Montesquieu presents Rica focusing on women and their rebellion against conforming to the authority. Women fought to bring justice to their sex and they utilized their reason to discover they were being treated inequitably and to see they had a right to interpret the Holy Bible - amongst other things - in their own way. ...read more.

This makes them appear full of reason to have the knowledge to do so. They also recognized the importance of educating, of passing on their knowledge from generation to generation. This strengthened their progress and their people. Even so, this apparently perfect society was broken by what made it great, the morality of its people. This became so great that they needed to offload the pressure on to an authorative figure, which broke the natural way, and mankind's perversion sets in. The Enlightenment was the result of many Frenchmen, women and subservient citizens analyzing their modern day culture and society, comparing it with natural laws and then acting to bring about change. Without the stories mentioned in 'The Persian Letters' other groups would not have received the ideas these people spread and would not have gone on to study and experience them for themselves. These stories and especially the fable of the Troglodytes incorporate both the process of discovering Enlightenment, and in comparison the terror of disintegration without it. Through their experience they had built up knowledge of what corrupted their people, and the best way to avoid negative events in their community. ...read more.