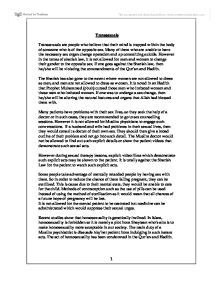 Transsexuals Transsexuals are people who believe that their mind is trapped within the body of someone who is of the opposite sex. Many of them who are unable to have the necessary sex organ change operation end up committing suicide. However in the terms of shariah law, it is not allowed for men and women to change their gender to the opposite sex. If one goes against the Shariah law, then he/she will be violating the commandments of the Qur'an and Hadith. The Shariah has also gone to the extent where women are not allowed to dress as men, and men are not allowed to dress as women. ...read more.

However during sexual therapy lessons, explicit video films which demonstrate such explicit acts may be shown to the patient. It is totally against the Shariah Law for the patient to watch such explicit acts. Some people take advantage of mentally retarded people by having sex with them. So in order to reduce the chance of them falling pregnant, they can be sterilized. This is cause due to their mental state, they would be unable to care for the child. Methods of contraception such as the use of pills can be used instead of using the method of sterilisation as it would mean that all chances of a future hope of pregnancy will be lost. ...read more.

The body then becomes cold and stiff. If left for a long period of time, then the body begins to decompose. If these signs are visible, then the person is considered to be dead in terms of the Shariah. If these signs are not visible, then the person is not considered to be dead. In this case, whether a brain-stem dead person is dead or not is not relevant. In either case, the persons organs are not allowed to be removed from the body. The organs and limbs of a deceased person belongs to Allah, so the person has no right in deciding as to whom his organs are donated to. If a fellow human is dying and the only option of survival is of eating another humans limb and another human gladly offers the too, it will not be allowed. ?? ?? ?? ?? 1 ...read more.