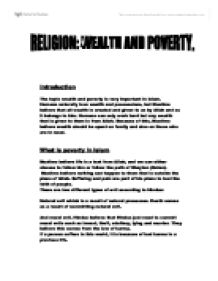 Muslim views on wealth and poverty

Introduction The topic wealth and poverty is very important in Islam. Humans naturally love wealth and possessions, but Muslims believe that all wealth is created and given to us by Allah and so it belongs to him. Humans can only work hard but any wealth that is given to them is from Allah. Because of this, Muslims believe wealth should be spent on family and also on those who are in need. What is poverty in Islam Muslims believe life is a test from Allah, and we can either choose to follow him or follow the path of Shaytan (Satan). Muslims believe nothing can happen to them that is outside the plans of Allah. Suffering and pain are part of his plans to test the faith of people. There are two different types of evil according to Hindus: Natural evil which is a result of natural processes. Death comes as a result of committing natural evil. And moral evil. Hindus believe that Hindus just need to commit moral evils such as incest, theft, adultery, lying and murder. They believe this comes from the law of karma. If a person suffers in this world, it is because of bad karma in a previous life. Muslims believe life is a test of obedience to Allah; therefore poverty is a test of patience from Allah. ...read more.

Allah has given us wealth and Muslims know that it doesn't belong to them. The wealth is not ours; therefore, we should share Allah's possessions with the poor. Muslims do this by giving charity, such as zakah, sadaqah, sadaqah jariyah etc. What is Zakah? Zakah is one of the pillars of Islam, in which we must give at least 2.5% of our income to the poor. It is compulsory to all Muslims who have enough money to pay zakah, they must have had the money for year, they cant be in debt, they cant be mental and they must be past the age of maturity. "And (in the daytime and at night) establish the prayer and pay Zakah and [for the cause of your religion and state] lend to Allah a befitting loan, and remember whatever good you send forth for yourselves you shall find it with Allah better than before and greater in reward." (73:20) The Qur'an demands that individuals take material responsibility for poverty and suffering in the Muslim community (ummah). That is why the Qur'anic revelation above demands that each person give up a certain amount of material wealth to support the poor. We must give zakah to the poor, the indigent, the sick the blind, orphans, the suffering etc. The following table shows the rates of zakah: Wealth Amount Rate Cash in hand or bank Our value of 595g silver 2.5% Gold and silver 85g gold, ...read more.

The prophet (S.A.W) said "when a man dies his action comes to an end except for three: an ongoing charity, knowledge that benefits others and pious offspring who pray for him" Riba/Interest Riba is the Arabic term used for usury. In Islamic terminology interest means effortless profit or that profit which comes free from compensation or that extra earning that is free of exchange. Riba is haram in Islam. The reason for this is because it is concerned a form of injustice, and exploitation. The economy today is debt based, and only does risk transfer, where as the Islamic economy is asset-based and doe risk sharing, it is all about fairness to all parties. The prophet (S.A.W) said " a dirham of usury a man devours with knowledge is greater than thirty six fornications" and it is also reported that he said "cursed the devourer of usury, its payer, its scribe and its two witnesses, and he said that they are equal (in sins)." Conclusion In conclusion wealth and poverty are very important matters in Islam. As Muslims we should know that life is given to us by Allah, therefore every thing in or possession belongs to Him so we must share our wealth. It is our duty as Muslims to help the ummah, and giving zakah and sadaqah will pure us from our greed and help our ummah. Also everyday friendly gestures such as smiling, helping can be a form of charity so you don't ever need wealth to give charity. ?? ?? ?? ?? ...read more.