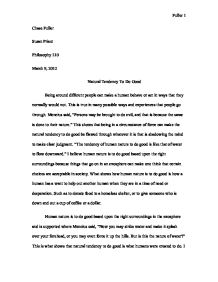 Natural Tendency to do Good. Being around different people can make a human behave or act in ways that they normally would not. This is true in many possible ways and experiences that people go through.

Natural Tendency To Do Good

Being around different people can make a human behave or act in ways that they normally would not. This is true in many possible ways and experiences that people go through. Mencius said, “Persons may be brought to do evil, and that is because the same is done to their nature.” This shows that being in a circumstance of force can make the natural tendency to do good be flawed through whatever it is that is shadowing the mind to make clear judgment. “The tendency of human nature to do good is like that of water to flow downward.” I believe human nature is to do good based upon the right surroundings because things that go on in an exosphere can make one think that certain choices are acceptable in society. What shows how human nature is to do good is how a human has a want to help out another human when they are in a time of need or desperation. Such as to donate food to a homeless shelter, or to give someone who is down and out a cup of coffee or a dollar.

Human nature is to do good based upon the right surroundings in the exosphere and is supported where Mencius said, “Now you may strike water and make it splash over your forehead, or you may even force it up the hills. But is this the nature of water?” This is what shows that natural tendency to do good is what humans were created to do. I have been in times in life where I made poor decisions based on the forceful circumstances that I chose to be around. There were people around that had addictive criminal thinking where it clouded my mind and was ultimately making me not choose the most logical choice to progress in life positively, rather negatively. These people that were indirectly giving influences toward my life, that fostered an environment that made it seem acceptable to break the law, and gave me an evil action. What I realized is that the choice in having the wrong set of people around me was affectively making me have a circumstance that was progressing into evil actions.

Where Mencius said, “People tend by their nature toward goodness, and it is only the adverse circumstances of their nurture that erode goodness and engender evil.” This fully supports natural tendency is to do good. People must think in a manner that will allow them to be of the right path and do what is righteous. Human nature has a distinctive tendency towards goodness, but ethical rightness cannot be initiated down to the last element. This is why simply external governors always breakdown in enlightening society. True progress results from learning education in constructive atmospheres.

Human nature is to do good based upon the right surroundings in the exosphere. Having bad circumstances tend to degrade the human will. However, this is not confirmation of natural evil because a pure thinking person would escape causing harm to other people. So without having a negative external exosphere the simplicity of natural tendency to do goodness will come easily than thinking about it. I have since after putting myself in a negative environment that caused my mind to think that doing evil was something that was tolerated in society, it has now given me options to progress in life. Being around more positive people makes the natural come forth in choices, decisions, and actions. With the rightness inside of someone it makes evil be present, but it does not let the evil pass through and have its way with the individuals mind and action.

I think it is significant that Mencius credits that human beings have certain natural abilities for goodness. If we did not have these abilities, I do not think any quantity of education could enforce these onto us. In this regard, I do think that education is a kind of attentive attending goodness. Mencius establishes that all people have hearts by engaging to the example of a child about to fall into a well. Mencius says that as soon as people see the child about to fall "they will feel a sense of unease and compassion." It is critical to notice that Mencius is not speaking about any kind of action here but about the instant response. These feelings of distress and empathy are not due to pursuing approval or wanting to reduce frustration. This response justifies Mencius' claim that "People all have hearts that do not tolerate the suffering of others".

I feel that this falls in with what I have been addressing because in both ways it is what you are taught and what is naturally inside of a humans’ mind. It helps to prove that human nature is to do good based upon the right surroundings in the exosphere. The human only wants a good way of life and not an evil way that only brings despair and anguish through wrong actions. A human’s natural and taught ways of goodness to live and learn through lessons, whether it is through teachings or of actions. I have lived through life having those negative attributes that made me realize it is not an aspect of life I would like to have of being an evil person while going through the journey. That is how I see that the unease and compassion come into play with the natural tendency to do good.

“When left to follow its natural feelings human nature will do good.” Mencius said that which helps support this argument of human nature is to do good based upon the right surroundings in the exosphere. If not putting yourself into a position to make you strive forward in the direction of virtuous instead of the wicked. With a clear peace of mind it helps to enfold life as it should be and have that natural tendency to do good.

Where Mencius says, “If it becomes evil, it is not the fault of our original capability.” This shows that another man or woman influences a humans thoughts. This proves that the exosphere can have a projection of a negative force behind it creating a circumstance that is not of the capability that the human should have. Mencius noted through these examples of senses: Sense of mercy, sense of shame, sense of respect, sense of right and wrong. He said, “seek and you will find them, neglect and you will lose them.” I feel that this is another reason proving the argument that has been stated throughout this paper to prove that human nature is to do good based upon the right surroundings because things that go on in an exosphere.