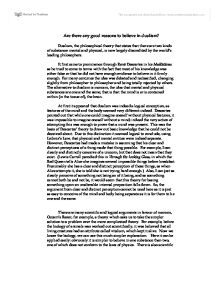 No Good Reasons To Believe in Dualism

Are there any good reasons to believe in dualism? Dualism, the philosophical theory that states that there are two kinds of substance: mental and physical, is now largely discredited by the world's leading philosophers. It first came to prominence through Ren� Descartes in his Meditations as he tried to come to terms with the fact that most of his knowledge was either false or that he did not have enough evidence to believe in it firmly enough. For many centuries the idea was debated and reclassified, changing slightly from philosopher to philosopher and being totally rejected by others. The alternative to dualism is monism, the idea that mental and physical substances are one and the same; that is that the mind is or is contained within (in the tissue of), the brain. At first it appeared that dualism was indeed a logical conception, as features of the mind and the body seemed very different indeed. Descartes pointed out that while one could imagine oneself without physical features, it was impossible to imagine oneself without a mind; indeed the very action of attempting this was enough to prove that a mind was present. ...read more.

Now we know the biology, we can use this much simpler explanation. Here it can be applied easily: obviously it is simpler to believe in one substance than two, one of which does not conform to the laws of physics. There is also scientific evidence that shows us how damaging or experimenting with the brain, which is undeniably physical, can affect a person's mental behaviour. Performing a lobotomy, for instance, can totally alter a person's personality - turning them from being calm and rational to being crude and rash, or vice versa. Similarly, stimulating neurons on the Thingybob Strip, which crosses the top of the brain, can cause sensations all over the body. It may be that prodding a part of this strip can make your elbow tingle in a most delightful manner or make your thumb feel as if it is being dragged through warm treacle. It would seem from this that the these feelings are to be found in the prodded part of the brain and this is where the mental is to be found within the physical. ...read more.

If the mental is indeed distinct from the physical it cannot be present within the same world as the physical things we know of, as removing physicals things would inevitably reveal the mental substance. Therefore it follows that it is connected to this physical world in some other way. However, Feigl tells us that it is ridiculous to believe that there is a separate type of law for these substances, which allows them to exist dependently of the rest of physics. Surely the mental substances cannot be 'dangling' outside of the realms of reality? These masses of arguments for monism overwhelm the poorer, outdated arguments for dualism, which stem from a less scientifically advanced age, in which the solutions appeared to work logically, based on a more internal philosophy of contemplation, which is now being replaced by a more practical philosophy, backed up by the sciences. Hence it is not unfair to say that previous ideas that worked in favour of dualism are no longer good reasons to believe the theory and that as we have better reasons to take the theory of monism seriously, we must subscribe to it, and not dualism, as the correct theory. By Michael Leversha ...read more.