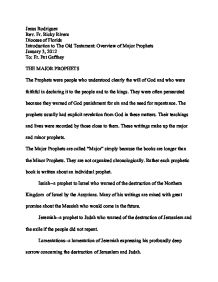 Overview of the Major Biblical Prophets

Jesus Rodriguez Rev. Fr. Ricky Rivera Diocese of Florida Introduction to The Old Testament: Overview of Major Prophets January 3, 2012 To: Fr. Pat Gaffney THE MAJOR PROPHETS The Prophets were people who understood clearly the will of God and who were faithful in declaring it to the people and to the kings. They were often persecuted because they warned of God punishment for sin and the need for repentance. The prophets usually had explicit revelation from God in these matters. Their teachings and lives were recorded by those close to them. These writings make up the major and minor prophets. The Major Prophets are called "Major" simply because the books are longer than the Minor Prophets. They are not organized chronologically. Rather each prophetic book is written about an individual prophet. Isaiah--a prophet to Israel who warned of the destruction of the Northern Kingdom of Israel by the Assyrians. Many of his writings are mixed with great promise about the Messiah who would come in the future. Jeremiah--a prophet to Judah who warned of the destruction of Jerusalem and the exile if the people did not repent. ...read more.

That judgment finds its immediate fulfillment in the impending Babylon captivity. Second, in spite of that temporal judgment, deliverance ultimately can be theirs(Is 40-66). There will be a return from the captivity, and, finally ultimately salvation will be provided by the coming Messiah. There are numerous prophetic glimpses of Christ in Isaiah, so much so that he is called "The Messianic Prophet".(cf. 7:14; 8:13; 9:6-7; 11:1-10; 28:16; 40:3-5; 42:1-4; 44::6; 50:6; 53:1-12). JEREMIAH Jeremiah is known as "the weeping prophet", was the most persecuted character of the Old Testament era. His own Jewish kinsmen cursed him, beat him threw him in prison, etc(see 15:10; 20:1; ff; 32: 2-3; 37:15). Jeremiah labored on behalf of God's people during the administrative of five Judah's Kings: Josiah, Jehoahaz, Jehoiakim, Jehoiachin and Zedekiah. His total preaching career could have spanned more than sixty years. Obviously he was a young man when called of God to assume his sober responsibility. The good king Josiah had attempted to reform the idol-prone Hebrews but his efforts were a matter of too little, to late. ...read more.

His prophecies Concerning the ultimate fall of Babylon are some of the most astounding in the entire Bible(cf 50-51). The saddest day in Old Testament history was when Jerusalem was taken by the Babylonian army and the Hebrew temple was burned to the ground(586 BC). Jeremiah had foretold these gruesome days and in his follow-up document, Lamentation, he further pursued the matter. EZEKIEL The book of Ezekiel represent the message of the prophet by that name who was taken captive in the second deportation of the Jews to Babylon; this occurred around the year 598-597 BC (2 Kings 24:14-15). Ezekiel began his ministry in the fifth year of his captivity(7-8 years before the final destruction of the temple). Ezekiel continued his work for some twenty-two years( cf. Ezekiel 1:2; 29:17). Just as there had been false prophets among the Hebrew people in Palestine( cf Jeremiah 28:3) so also evil deceivers were among the Jews in Babylon. These corrupt prophets were suggesting that the captivity would not last a full seventy years, as Jeremiah had declared(25:12; 29:10); rather within a couple of years or so(28:3), this Babylonian unpleasantness would be over, and Israel would be restored to its homeland. ...read more.