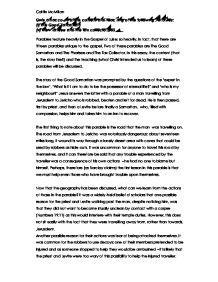 Parables. Give an account of the content and teaching of the Good Samaritan and the Pharisee and The Tax Collector.

Give an account of the content and teaching of the following parables: (i) the Good Samaritan (ii) the Pharisee and the tax collector. [35] Parables feature heavily in the Gospel of Luke; so heavily, in fact, that there are fifteen parables unique to the gospel. Two of these parables are The Good Samaritan and The Pharisee and The Tax Collector. In this essay, the content (that is, the story itself) and the teaching (what Christ intended us to learn) of these parables will be discussed. The story of the Good Samaritan was prompted by the questions of the 'expert in the law', 'What is it I am to do to be the possessor of eternal life?' and 'who is my neighbour?' Jesus answers the latter with a parable of a man travelling from Jerusalem to Jericho who is robbed, beaten and left for dead. He is then passed, first by priest, and then a Levite before finally a Samaritan, who, filled with compassion, helps him and takes him to an inn to recover. The first thing to note about this parable is the road that the man was travelling on. The road from Jerusalem to Jericho was notoriously dangerous; about seventeen miles long, it wound its way through a lonely desert area with caves that could be used by robbers as hide-outs. ...read more.

As in the Good Samaritan, the parable flips the audience's expectation: the Pharisee's prayer is one of self-righteousness and contempt; the tax collector's prayer, however, is one of humility, and it is he who, at the close of the parable, returns home justified. In order to truly understand the teaching of the parable it is necessary to study the two prayers separately, and then contrast them. The first detail to note is that the Pharisee, who represents the entirety of the Jewish leadership, stands to pray by/with himself; this could mean one of two things. It could be telling us that the Pharisee was quite literally by himself, separated from others in the temple. However, it may also indicate the focus of his prayer, rather than his isolation. While his prayer begins in a form as a 'thanksgiving' to God, it continues in a self-centred way with no reference to God. He glories in what he is ("I am not like other men"), what he does ("I fast twice a week"), and what he gives ("I give tithes of all that I possess"). Self is a prominent feature of his prayer (he uses the personal pronoun "I" five times) showing his great obsession with himself. From this, we can learn about pride; as Barclay says, 'no man who is proud can pray.' ...read more.

Here, we are told that we must be a neighbour to everyone; we must show mercy and compassion on everyone - mirroring the actions of Christ. Another theme is wealth, or the right use of wealth; this is displayed in the parable of The Rich Fool. The rich fool thought only of his own enjoyment in the use of his wealth. He failed to consider the source of his wealth or the fact that life consists of much more than material possessions. Vs. 20 suggests that life is on loan from God and that we are accountable to him for it. The third and final theme which will be discussed is that of prayer. One of the parables relating to prayer is that of the Unjust Judge. The judge acts on behalf of the widow so that she will not keep pestering him. However, the parable indicates that God is not like the unjust judge; rather, he will adjudicate the cause of his people quickly - Luke gives his readers confidence that God hears and responds to prayer. Another parable that teaches us something about prayer is that of the Pharisee and the Tax Collector - it emphasises the humility and repentance with which one should approach God. In conclusion, the term 'parable' is ambiguous in itself; however, once we get past this initial issue, the meaning of the parables in Luke is fairly clear, as he uses them to express the themes which are prominent throughout the rest of his gospel. ...read more.