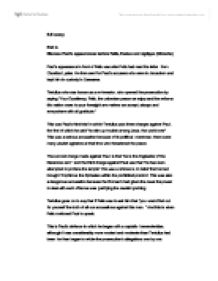 Paul’s appearance in front of Felix was after Felix had read the letter from Claudius Lysias. He then sent for Paul’s accusers who were in Jerusalem and kept him in custody in Caesarea.

Tertullus who was known as a re-investor, who opened the prosecution by saying “Your Excellency, Felix, the unbroken peace we enjoy and the reforms this nation owes to your foresight are matters we accept, always and everywhere with all gratitude.”

This was Paul’s third trial in which Tertullus puts three charges against Paul, the first of which he said “he stirs up trouble among Jews, the world over”. This was a serious accusation because of its political overtones; there were many Jewish agitators at that time who threatened the peace.

The second charge made against Paul is that “he is the ringleader of the Nazarene sect.” and the third charge against Paul was that “he has even attempted to profane the temple” this was a reference in belief that he had brought Trophimus the Ephesian within the prohibited precinct. This was also a dangerous accusation because the Roman’s had given the Jews the power to deal with such offences was justifying the Jewish lynching.

Tertullus goes on to say that if Felix was to ask him that “you would find out for yourself the truth of all our accusations against this man.” And this is when Felix motioned Paul to speak.

This is Paul’s defence in which he began with a captatio benevolentiae, although it was considerably more modest and moderate than Tertullus had been: he then began to refute the prosecution’s allegations one by one.

Firstly he was not a trouble maker since he went to Jerusalem as a pilgrim to worship, not as an agitator to cause a riot, and his accuser could produce no evidence that in temple, synagogue or city he had caused a disturbance or even engaged in an argument.

Secondly Paul addressed himself to the charge that he was a ringleader of the Nazarene sect.

Although he was indeed “a follower of the way “this was not a “sect “ as they called it, for he worshipped the god of their fathers and believed the teaching of the Scriphires.

Paul purpose in this was not just to make a personal declaration, however but to insist that he shared it with the whole people of god. He worshipped the same god, believed the same truths, shared the same hope and cherished the same ambition. He was not an innovation, but loyal to the ancestral faith.

The third accusation against Paul, that he had profaned the temple. This he denies.

Paul’s purpose in visiting Jerusalem had been religious, and his condition when he was found in the temple doing this, had been one of ceremonial purity. It was certain Asian Jews who had interfered with him and caused a riot.

Paul’s fourth trial in front of Festus is of high importance this is before it is the trial which puts Paul on his safe guarded journey to Rome by appealing to Caesar. It is apparent here that Festus refuses the Jewish demands and is determined to allow justice to take its course.

Festus wanted Paul to remain in custody in Caesarea and said to the men, who were planning an ambush against Paul “let your authorities come down with me and if there is anything wrong about the man they can bring a charge against him.” This is a common pre-judgement to make and therefore is Festus is acting fairly on Paul’s behalf.

When Festus called Paul to the tribunal, the Jew’s who had travelled from Jerusalem surrounded him making serious accusations. Paul then defended himself by saying,” I have committed no offence whatever against either Jewish law or the temple or Caesar.” This shows us that there were three main charges against Paul made by the Jews, therefore once again both Political and religious charges are mixed. This may be because the Jew’s knew that the Roman Governors were unwilling to convict on purely religious charges and therefore tried to give a political twist to the religious charge. Therefore the prolongation of this trial may be down to the fact that the charge against Paul was political but the evidence to back it up was theological.

Festus however at this stage knew perfectly well that Paul had committed no offence and Paul’s only option left was to appeal to Caesar. Festus seems unprepared for this as he did not want to offend the Roman Justice however he also did not want to offend the Jew’s. Festus then concluded by saying “you have appealed to Caesar, so to Caesar you must go” however as Festus is unsure of a clear charge to write for Paul he goes on to ask for King Agrippa’s advice.

Paul’s fifth trial is therefore in front of Agrippa who was influential in Jewry because the Emperor Claudius had committed to him both the care of the temple and the appointment of the high priest. (Josephus Antiquities)

Agrippa then says to Paul “you have leave to speak on your own behalf” and then Paul held up his hand and started his defence. Paul then goes on to tell his personal story, drawing attention to three principal phases –

Firstly Paul starts by saying how he had lived as a child, first is Tarsus, then in Jerusalem as a strict Pharisee. It is therefore anomabus that he should be on trial for his hope in God’s promise to the fathers, which he and they shared, namely that God would send his messiah as foretold in the scriptures, to rescue and redeem his people.

Secondly Saul the Pharisee was convinced that it was his solemn duty to oppose the name and the claims of Jesus of Nazareth as those of an impostor. He began his persecuting program in Jerusalem and not only imprisoned many disciples but when they were sentenced to death he cast his vote against them.

Thirdly in Paul’s account to Agrippa of what happened on the Damascus road, what he stressed was not his conversion, but his commissioning as he was commissioned to be sent to be the apostle to the Gentiles in order to spread the gospel “not only in Jerusalem but throughout Judea, Samaria and indeed to the ends of the earth.”

Agrippa then concludes saying “this man is doing nothing that deserves death or imprisonment. This man could have been set free if he had not appealed to Caesar.”

Overall these three trials show Paul is two states firstly as a defendant as he denies the charges and secondly as a witness as he explains how he was commissioned to be Christ’s servant and witness.

Critically evaluate the claim that the Author of Acts was more interested in the spread of the gospel message than the historical message.

The claim that Luke, the author of acts was more interested in the spread of the gospel message than the historical message can be assessed in two ways, theologically and historically.

Theologically, Luke’s purpose can be seen in the book of acts in Chapter 1 verse 8 when he writes “you will be my witnesses not only to Jerusalem but throughout Judea and Samaria and indeed to the ends of the earth.” It this Luke may be wishing to show that the purpose was to spread the gospel message to the ends of the earth, Rome this can be thought of again at the end of Acts when we understand that the message has reached Rome and so has Paul. Barclay wrote that “the power of the spirit was going to make them Christ’s witnesses. That witness was to operate in an ever-extending series of concentric circles”- this is too show that the gospel message and Christian community is getting bigger like a stone into water.

Another theological explains may be that the purpose of acts is to include the spread of the gospel message to the gentiles. This can be shown in chapter 9 verses 15 at Saul’s conversion were the Lord told Saul “you must go to all the same, because this main is my chosen instrument to bring my name before pagans and pagan kings and before the people of Israel. This can also be seen is Paul’s fifth trial in front of King Agrippa were Paul in his defence explains how he was commissioned to bring the gospel message to the gentiles.

Historically, Acts can be made out that Luke desired to give Theophilus an authoritative history of Christian beginnings in order that he might know the certainty concerning the things that he had been taught, as Luke told Theophilus that he wrote acts for him which we can see in his prologue. In this prologue we get the sense that this is the second chapter of a continued story the first being the gospel of Luke which details that earthly life of Jesus, the second being the story of the Christian church.

Therefore overall I believe that Luke had two points to make when he wrote the Acts of the Apostles, however I also believe that he was heavily focused on the gospel message and that the history was just a small part.