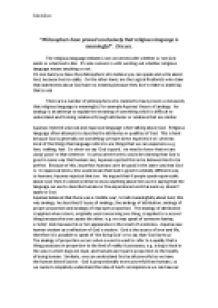 Philosophers have proved conclusively that religious language is meaningful. Discuss

ï»¿Siân Aiken ‘’Philosophers have proved conclusively that religious language is meaningful’’. Discuss. The religious language debate is not concerned with whether or not God exists or what God is like. It’s sole concern is with working out whether religious language means anything or not. On one hand you have the philosophers who believe you can speak and write about God, because God is reality. On the other hand, are the Logical Positivists who claim that statements about God have no meaning because they don’t relate to anything that is real. There are a number of philosophers who claimed to have proven conclusively that religious language is meaningful, for example Aquinas’ theory of analogy. An analogy is an attempt to explain the meaning of something which is difficult to understand and forming relations through attributes or relations that are similar. Aquinas rejected univocal and equivocal language when talking about God. Religious language often attempts to describe the attributes or qualities of God. This is hard because God is generally not something we have direct experience of, whereas most of the things that language refers to are things that we can experience e.g. ...read more.

During the 20th Century an issue that dominated most discussion about philosophy of religion centred on the meaningfulness of religious language. The problem with the communication of the ideas about God, faith, belief and practice, is that behind the words are concepts. Individuals have different understandings of the concepts and this may result in differing interpretations and meaning. There are some philosophers that argue that religious language is used in different ways that language is used in everyday life. It could show a person?s commitment to a particular faith tradition, or it could make a claim on behalf of that tradition. There are some philosophers who assert that religious language is cognitive and therefore something about God may be known. The problem with this is that religious statements are not about objective facts that can be proved true or false. If we are unable to validate religious statements based on objective facts that are open to cognition then religious language is considered to be meaningless. There is also the problem of how one can describe God when nothing is known about God. For example, is it right to refer to a supreme being using human terminology like ?He? and ?Him? or referring to what God ?said?. ...read more.

Flew applied the falsification principle to religious language and he concluded that religious statements are meaningless. Flew argued that that this was because there is nothing which can count against religious statements. Religious statements can?t be proved true (verified) or false (falsify) because religious believers do not accept any evidence to count against their beliefs. For Flew, there is no difference between meaningless and non-falsifiability. Flew argues that Christians hold their belief ?God is good?, even when there is evidence offered against his goodness. Flew uses the example of a human father desperate to save his child dying of inoperable cancer: the ?Heavenly Father? appears indifferent to the child?s suffering. To account for God?s indifference the believer allows nothing to count against the idea that ?God loves us as a father?. In conclusion I would say that even though I am a Christian I would have to take the side of logical positivists because it?s true we cannot empirically prove anything regarding God because there are so many contradictions of for example when we say ?God is good?, you have to question is he really and what evidence is there, because if he is a ?father figure? then why are so many people allowed to die so innocently to stop it, if he was good then he would have stopped it by now. ...read more.