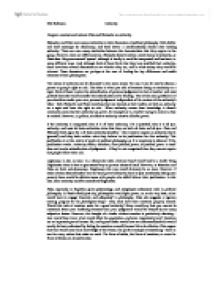 Plato and Nietzsche on Authority

Compare, contrast and evaluate Plato and Nietzsche on authority. Nietzsche and Plato have many similarities in their discussion of political philosophy. Both dislike and hold contempt for democracy, and both favour a meritocratically chosen elite holding authority. There are even many similarities between the characteristics that they require in the group. However, there are differences too. Nietzsche doesn't outline a strict theory of authority, as Plato does. His governmental 'system', although it hardly is, could be interpreted, and has been, in many different ways. And, although both of them think that they have justified their authority, there have been several discussions on to whether they are, and in what society they would be relevant. These discussions are perhaps at the core of finding the key differences and usable elements of their philosophies. The notion of authority can be discussed in two main senses. For one, it can be used to discuss a person or group's right to rule. The other is when you talk of someone being an authority on a topic. Both of these involve the subordination of personal judgement to that of another and most political theorists would consider this subordination to be binding. One of the main problems is if you should surrender your own personal judgement independent of the content of the authority's ideas - both Nietzsche and Plato would say that one should, as their leaders are both an authority on a topic and have the right to rule. When authority comes from knowledge, it doesn't necessarily mean that the authority has power, for example as in a teacher trying to control a class at a school. However, in politics, an effective authority must be allied to power. If the authority is recognised, then it is de facto authority. If it is justified, then it is de jure authority, and most de facto authorities claim that they are both de facto and de jure. ...read more.

The current system in the United Kingdom is for people to vote in a representative that they trust to make similar decisions to those that they would choose. Of course, the representative cannot be trusted to have exactly the same views, and therefore, should the vote be more open? If people were allowed to vote on any topic that interests them, what would happen? The government may be forced to ban petrol cars. The main question is, is it really democratic once elected? The system in the UK is not fully democratic. Plato would argue that the only way for a government to make truly 'right' decisions (and therefore decisions that the public would have to agree with - there's nothing to disagree with if something is 'right) is for them to know 'good' - be trained in abstract thought and philosophy. So democracy, to be worthwhile, perhaps needs to be more democratic, or Plato and Nietzsche have the right idea. Jeremy Bentham famously associated utilitarianism with democracy - he believed that one vote per person would lead the 'the greatest good for the greatest number'. This is because human nature naturally tends to lead us towards pleasure, as opposed to pain. And, because everyone has this same desire towards pleasure, democracy would effectively allow all of us to vote for pleasure, so to speak. This seems like a more feasible idea than relying on someone who, although in theory 'doesn't have personal interests', probably would be biased. Humans do tend to avoid pain, so an open vote would lead us away from pain. Change Nietzsche quotes on asceticism! Another important feature that both Nietzsche and Plato mention in their political philosophy is asceticism. Nietzsche mentions that the tests of self-deprivation that (Christians mostly) pervade Western society are bad - "wherever religious neurosis has appeared on earth, we find it tied up with three dangerous dietary rules: isolation, fasting, and sexual abstinence". ...read more.

Although Nietzsche did support tyrant, he did appreciate the subjectivism of morals and opinion, and was not advocating forcing ones views upon others (unlike Hitler). His lack of respect for democracy is not the only thing that calls into question modern government. He doesn't even specify if there should be a (totalitarian?) leader at all, merely that the free spirits would 'hold power' as such. His appreciation of subjectivity means that a leader would not strictly work: all views are different, so no leader would be truly right. The free spirit seems merely to be an authority to show others with the will to power what they can achieve. Conclusion Both of these systems involve elements of the totalitarian about them. Plato seems to advocate both communism in monetary matters and lifestyle and the complete opposite when it comes to defining differences between peoples. He argues strongly for different classes of people, like Nietzsche, and for an authority that is placed in power with no choice. It's not as bad as it seems, if one agrees with the justification of the argument - however, it would be a long struggle for people to accept it. Nietzsche, on the other hand, has often been blamed for inspiring Hitler (which is untrue, as Nietzsche despised racism and anti-Semitism), and it is easy to see why, as he advocates gaining authority by force, relishes in aristocratic barbarianism, and believes that there are 'levels of people'. This means that their theories on authority aren't very practical, and neither de jure or de facto, particularly by modern standards. A preferable system, therefore, would be a mix of Plato's equality for women, Nietzsche's appreciation for the artistic nature, and ... (include other philosophers). Of course, it's unforeseeable to be able to find a perfect authority, one who is justified, true, moral and recognised. As Nietzsche said, all philosophy to date has been 'personal confession' - if this is true (which it seems likely to be), then there will never be a perfect authority, justified and recognised by all. ?? ?? ?? ?? Ellie Robinson Authority ...read more.