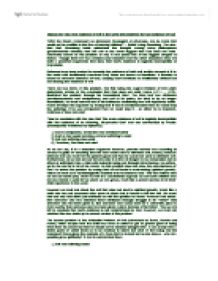 Discuss the view that existence of evil in the world demonstrates the non-existence of God "After the Shoah [Holocaust] no statement, theological or otherwise, can be made that would not be credible in the face of burning children"" - Rabbi Irving Greenberg. The view that that Greenburg holds epitomises the thought among many philosophers (predominantly atheists) that the evil in the world suggest that God does not exist. Commonly known as the problem of evil, it has posed one of the biggest dangers to theism. Though there are two versions (one inductive and the other deductive) they are both a posteriori arguments that show that God's existence is logically incompatible or improbable. Defences have been created to reconcile the existence of both evil and the amount of it in the world with traditionally conceived God, these are known as theodicies. A theodicy is bound to advocate existence of God, keeping God's attribute as traditionally defined and not denying the existence of evil. ...read more.

So this problem does not show the non-existence of God. He solves the problem by saying that all evil leads to soul-making (spiritual growth) which can lead us to eschatologically reunited and rewarded by God. This view follows that we are not God's pets, where we live in a comfortable cage but we are God's children and he has created a world for us where we can grown, much like a parent who has to let their child experience in the world. However we must ask about the evil that does not lead to spiritual growth, much like a child who has not recovered after years of abuse but is forced to kill him self. We must also ask why God didn't just attribute us with the qualities he wants. However Hick states that someone who has obtained these attributes through struggle is far "richer" than someone who has been given it, like someone who works hard for a university place is more worthy than someone who has been given a place because of his father. ...read more.

We can say that is probable that we all no all 'goods' and when we can not think of a justifiable reason, then it is probable that there is no higher good and thus probable that there is no such God. We could even argue that it can never be justified as Fyodor Dostoevsky (1821 - 1881) wrote "And if the sufferings of children go to swell the sum of sufferings which was necessary to pay for truth, then I protest that the truth is not worth such a price." So we must conclude as Thomas Huxley did and say that "brought to the tribunal of ethics, the universe would stand condemned" because nothing can justify or explain the sheer amount of evil in the world. Iraneus' theodicy does not explain the sheer amount of gratuitous evil in the world and the appeal to ignorance is not successful. Thus, although we might not be able to conclude that the existence of God is logically incompatible we can say that it demonstrates that the existence of God is improbable. ...read more.