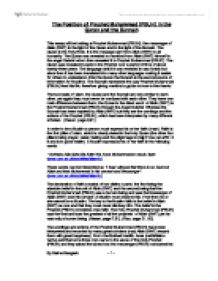 This essay will be looking at Prophet Muhammad (PBUH), the messenger of Allah (SWT) in the light of the Quran and in the light of the Sunnah. The Quran is the Holy Book, it is the message sent from Allah (SWT) to all humanity. The Quran was revealed to mankind from Allah (SWT) himself to the angel Gabriel whom then revealed it to Prophet Muhammad (PBUP). The Quran was revealed in parts to the Prophet over a period of time of about twenty-three years. The language which it was revealed in was Arabic but since then it has been translated into many other languages making it easier for others to understand. After the Quran the Sunnah is the second source of information for Muslims. The Sunnah represents the way Prophet Muhammad (PBUH) lived his life, therefore giving mankind a guide on how to live there's. The two basis of Islam, the Quran and the Sunnah are very similar to each other, yet again they must never be confused with each other. ...read more.

The wordings and actions of the Prophet Muhammad (PBUH) have been interpreted and recorded by many great scholars (may Allah (SWT) reward them with great happiness). From the Bukhari Hadith, Anas (radhiAllahu 'anhu) said that once three men came to the wives of the Holy Prophet (PBUH) and they asked the wives how the messenger (PBUH) conducted his worship. When they were told about it they seemed very shameful as they had not been praying as much and said how there was a great difference between themselves and the messenger of Allah (SWT), whose former and latter sins had been forgiven by Allah (SWT). To devote their lives more to Allah (SWT), the first man said that he will pray during the night from today onwards, the second man said that he will fast all the time during the day and the third man said that he shall have nothing to do with women and shall not get married and devote his life to Islam. When Prophet Muhammad (PBUH) ...read more.

Without the true belief in the Prophet (PBUH) one cannot be a true Muslim. From this essay we can see the position The Holy Prophet (PBUH) holds in the Quran and in the Sunnah. In order to have Iman (faith) and be a Muslim, one must believe that Allah (SWT) is one and there is no other and that Prophet Muhammad (PBUH) is His servant and His messenger. The Prophet (PBUH) holds an extremely high position in Islam; it must be believed that he was Messenger of Allah (SWT) and very last Prophet and that there will be no other after Him. Therefore all Muslims should pay a great deal of attention to the Sunnah so they know how to lead their lives according to Allah (SWT). Prophet Muhammad said "I am leaving behind two things among you, you will never go astray if you keep hold onto them. They are the Quran and the Sunnah". (Obey Allah and Obey the Messenger, page 20). Referencing Hasan S, Faith In Predestinantion, 1991, Al-Quran Society Hasan S, The Muslim Creed, 1991, Al-Quran Society Obey Allah and Obey The Messenger, Jam'iat Ihyaa' Minhaaj Al-Sunnah Rao K.S.R. ...read more.