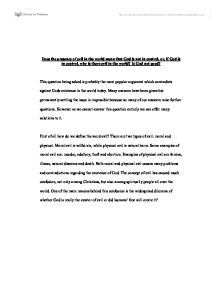 This question being asked is probably the most popular argument which contradicts against Gods existence in the world today. Many answers have been given but permanently settling the issue is impossible because so many of our answers raise further questions. However as we cannot answer this question entirely we can offer many solutions to it.

First of all how do we define the word evil? There are two types of evil: moral and physical. Moral evil is wilful sin, while physical evil is natural harm. Some examples of moral evil are: murder, adultery, theft and abortion. Examples of physical evil are famine, illness, natural disasters and death. Both moral and physical evil causes many problems and contradictions regarding the existence of God. The concept of evil has caused much confusion, not only among Christians, but also among spiritually people all over the world. One of the main reasons behind this confusion is the widespread dilemma of whether God is really the creator of evil or did humans’ free will create it?

The idea of God creating evil is contrived by many religious groups. Judaism talks about ‘yetzer ra’ which translates to ‘evil impulse, and also ‘yetzer tov’ or ‘good impulse’. Judaists realise they all have these impulses as humans and the goal is to not give into the ‘evil’ impulse. From a Catholic point of view they believe evil is the absence or opposite of good, and moral evil results from humankind’s free choice of sin. A lot of Christians believe evil entered through the world due to the original sin.

For many believers the idea of God supposing to be all-loving and all-powerful and at the same time allow the existence of evil and suffering in this world is hard to accept. The free will defence is one of the most popular approaches that theologians use to answer the question above. This approach transcends its argument by attacking the idea that an all-loving and all-powerful God cannot exist in a world where evil survives. The argument says that when God created humans, he gave us the ability to choose our course of actions for ourselves. He did this because He wanted us to experience on our own between right and wrong, good and evil, and believing in Him or not. God could not create humans without giving them free will. If He had done so, then humanity’s faith in God and their actions of faithfulness would mean nothing.

A lot of people believe that at afterlife all the innocent that suffered because of the evil acts of others must be compensated for being faithful to God, in spite their suffering. This is why some believe that for the free will defence to work there must be a dimension beyond time and history where suffering finds its course.

For most people the problem of evil is not an intellectual problem, but an emotional one. They want to know why God allows evil and suffering. When they can’t get a satisfactory answer, they become angry. They don’t like a God who would permit them or others to suffer.

Firstly, from the opposing point of view, people may think that God created evil and that this is the root of all suffering in the world for reasons we simply cannot yet understand. Christians can have confidence in God knowing that; “His ways are above ours” (Isaiah 55:8-9), which means that Christians can put there faith into God whatever he does, and even if there is something in the world they do not understand yet - Christians know it is for a reason.

Secondly, God is possibly using suffering to do good. In other words, he produces patience through misfortune. Or He may desire to save someone through it all. An example of this is the account of Jospeh who was sold into slavery. Jospeh suffered greatly for this but God rose Joseph up into Egypt to make supplies for the people of the land during the coming drought of seven years. Egypt was saved and so was Joseph’s family and brothers who originally sold him into slavery. Joseph replies “You meant it for evil, but God meant it for good” (Genesis 50: 15-21). This quotation basically speaks for itself. Joseph is saying that God is letting his brothers do something immoral but God is doing it for the good of Joseph’s family.

Thirdly God may be letting evil occur so that on the day of judgement, the damned will have no say regarding their sentence. God isn’t stopping people from exercising their free will; he is simply letting them proceed with how they want to live their lives. When the day of judgement comes upon us, all of the sins and evil will be taken into account regarding the person.

God is a good person in many diverse ways. If some people believe he created evil then they will have a different representation of him (most probably a bad representation), but as for the others who believe in free will, they might see God in a positive way. Nothing in the Bible shows God being a hateful person to his followers. But if there was a inkling of doubt, like Josephs’ tale, if God is doing something evil then it is in the end meant for good.

Overall I can come to a conclusion that God isn’t the reason why evil is present in the world. We cause our own suffering. Our sinful world is the unfortunate result of human choice; not even Satan can force us to sin. Pain, suffering and death are integral parts of the material world due to Adam's sin, but Christianity offers hope through the suffering of Jesus Christ. Evil in this world is not a disproof of God, but a constant reminder of our need for the perfect God of the Bible. The free will defense is a very functional way of approaching evil in this world.

It allows people to logically understand and accept the fact that evil is able to exist in a world that an all-knowing and all-powerful God created. This defence is not infallible but it does however answer the problem sufficiently for many believers including myself.