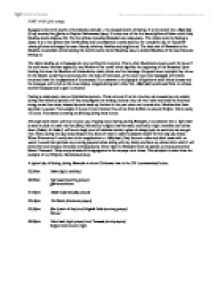 Ramadan is the ninth month of the Islamic calendar

PART ONE (500 words) Ramadan is the ninth month of the Islamic calendar - the blessed month of fasting. It is the month that Allah (swt) (God) revealed the Qur'an to Prophet Muhammad (saw). It is also one of the five sacred pillars of Islam which help Muslims lead a religious life. The five pillars, including Ramadan are compulsory. The Arabic term for fasting is Sawm. It is a very special time for Muslims and its completion is celebrated by the wonderful day of Eid al-Fitr where gifts are exchanged between friends, relatives, families and neighbours. The basic aim of Ramadan is for Muslims to establish control during the month and be better Muslims, also, to remind Muslims of the less fortunate among us. The nights leading up to Ramadan are very exciting for everyone. This is when Muslims anxiously await the news if the new moon has been sighted by any Muslim in the world which signifies the beginning of the Ramadan. Upon hearing the news the Muslims will immediately email, phone and text message this good news to people they know. In the Islamic world this is announced on the radio or television, or the local town crier (muezzin) will inform everyone from the loudspeakers of the mosque. It is common to find people will gather at each others houses and the mosques will be full as the news breaks, congratulating each other that Allah (swt) ...read more.

It is a time of purification, reflection, enjoining what is right, forbidding what is wrong, and striving hard with one's life and wealth. It is a time for charity, to give to those less fortunate then yourselves and it's a time when most people pay their annual alms to the poor (above). It was in the month of Ramadan that many of the battles took place such as the famous Islamic battles took place such as the Battle of Badr. Amongst what Muslims should abstain from are smoking, and sexual intercourse. People should focus on Allah and religion as opposed to other things. What the prayers seek to serve five times a day, fasting in the month of Ramadan does once a year. During this period from dawn to dusk we eat not a grain of food nor drink a drop of water, no matter how delicious the dish or how thirsty we feel. This month helps us strengthen our faith. Discipline during this month bring us face to face with the realities of life and help us make our life, during the rest of the year, a life of true subservience to Allah (swt). From another point of view fasting has an immense impact on our communities, for all the Muslims irrespective of their status must observe fast during the same month. ...read more.

As for the disadvantages, I believe the benefits far outweigh the harms of fasting. A few points to I would like to mention however are is that when early on during the month when one is fasting during a long day, one tends to become very tired towards the end of the day due to the fact that normal regular meals have been missed, however as the month progresses the body adapts very quickly to this new regime softening these hardships. In addition, during the day, especially during the summer when the days are long and the heat is intense the lack of water consumption can make one extremely thirsty and somewhat dehydrated which can lead to a stale breath. However, the remedy to this is the saying of the Prophet who said "The smell of the mouth of a fasting person is to sweeter to Allah (swt) than the smell of musk". Another potential problem is tendency to eat too much in the evenings and at the end of the month to pile on a few unwanted pounds. This is easily resolved by making sure you eat moderately and exercise to burn off excess calories. Also, there is the ounce of temptation present brough to us by Shaytan (Devil) and this makes it hard for us. Finally, one sad thing about Ramadan is that it only comes round once a year and lasts for around thirty days. If only we could have longer as there are not enough hours in the day. ...read more.