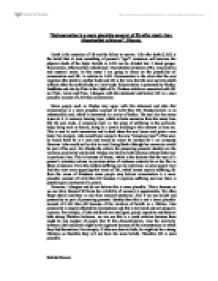 &quot;Reincarnation is a more plausible account of life after death than disembodied existence&quot;

"Reincarnation is a more plausible account of life after death than disembodied existence". Discuss. Death is the cessation of life and the failure to survive. Life after death (LAD) is the belief that at least something of person's "ego"/ conscious self survives the physical death of the body. Beliefs in LAD can be divided into 5 broad groups- Reanimation, Otherworldly embodiment, Disembodied existence (DE), reincarnation and mystical union. In this essay I am going to focus on the plausibility of reincarnation and DE, in relation to LAD. Reincarnation is the claim that the soul migrates after death to another body and DE is the view that the soul survives death without either the earthly body or a new body. Reincarnation is presented by Hindus, Buddhists and also by Plato in the Myth of Er. Thinkers which are associated with DE are Plato, Lewis and Price. I disagree with this statement and believe DE is a more plausible account of LAD than reincarnation. Some people such as Hindus may agree with this statement and state that reincarnation is a more plausible account of LAD than DE. Hindus believe in an indestructible soul, which is incarnated in a series of bodies. The soul also has many layers to it. A memory- bearing layer, which collects memories from the many lives that the soul leads. ...read more.

Therefore DE is more plausible. Buddhists do not believe in the existence of an immaterial soul, but they do believe that the sense of self as a radically separate and distinct individual is illusory. Distinguishing between individuals can occur by the uniqueness of a combination of activities, thoughts, likes and relationships. Reincarnation ends when the person achieves the realisation that the individual self is illusory. This is through enlightenment. For Buddhists the criteria for preserving personal identity is memory. So for some people the Buddhist view may influence them to believe reincarnation is a more plausible account of LAD than DE because there is no need for immaterial substances and it avoids the problem of interaction. However, since Buddhists do not believe in a soul then there does not seem to be any "psychic substance" which could store and transmit this mental "pattern". Also they appeal to the law of karma, lives are causally connected through karma and those of the same person. But how can a person's previous life affect this one now if there are no immaterial substances? Also from Plato's argument for the cycle of opposites we see DE is a more appealing account of LAD because it offers an argument for the soul's existence. Something is what it is because of it's opposite, this is definition by negation. ...read more.