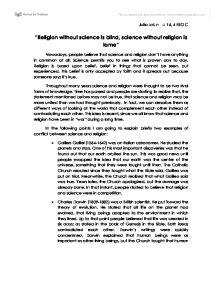 Religion without science is blind

"Religion without science is blind, science without religion is lame" Nowadays, people believe that science and religion don't have anything in common at all. Science permits you to see what is proven day to day. Religion is based upon belief, belief in things that cannot be seen, but experienced. This belief is only accepted by faith and it spreads out because someone says it's true. Throughout many years science and religion were thought to be two rival forms of knowledge. Time has passed and people are starting to realize that, the statement mentioned before may not be true, that science and religion may be more united than we had thought previously. In fact, we can describe them as different ways of looking at the world that complement each other instead of contradicting each other. ...read more.

* Charles Darwin (1809-1882) was a British scientist. He put forward the theory of evolution. He stated that all life on the planet had evolved, that living beings adapted to the environment in which they lived. Up to that point people believed that life was created in six days; as stated in the book of Genesis in the Bible. Both ideas contradicted each other. Darwin's writings were quickly condemned. Darwin explained that human beings were as important as other living beings, but the Church taught that human beings were more special than other living creatures. Here you can see a clear example of reason and faith against each other. Things have changed today. Christians now accept Darwin's theory. Fundamentalist Christians are those who follow the Bible literally word for word. ...read more.

Pierre Teilhard de Chardin (1881-1955) was a French Roman Catholic priest and a scientist. He spent most of his life researching scientifically. He believed that scientific work gave him a deeper understanding of God as creator. In my opinion, there is both good and bad aspects of scientific and religious interpretations. Sometimes I differ in opinion with science or religion. My opinion depends on what is being explained, I analyze which option is more logical. Everyone commits errors and this also holds true for both science and religion. In order for me to believe something I need to understand and rationalize why it is correct. If you make a claim then you should be able to defend it; you must be able to demonstrate the claim to others. Even though the process of demonstration is a scientific task, religion is also very helpful because it requires people to rely upon something greater, and that is faith. ...read more.