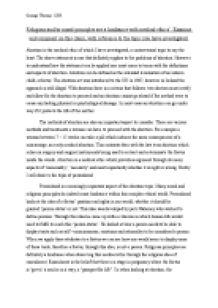 Religious and/or moral principles are a hindrance with medical ethics. Examine and comment on this claim, with reference to the topic you have investigated.

﻿George Thomas 12JB Religious and/or moral principles are a hindrance with medical ethics?. Examine and comment on this claim, with reference to the topic you have investigated. Abortion is the medical ethic of which I have investigated; a controversial topic to say the least. The above statement is one that definitely applies to the problems of abortion. However to understand how the statement can be applied one must come to terms with the definitions and aspects of abortion. Abortion can be defined as the intended termination of an unborn child, a foetus. The abortion act was introduced to the UK in 1967; however in Ireland the approach is still illegal. With abortion there is a criteria that follows: two doctors must certify and allow for the abortion to proceed and an abortion cannot go ahead if the method were to cause any lasting physical or psychological damage. In most cases an abortion can go under way if it protects the life of the mother. The methods of abortion are also an important aspect to consider. There are various methods and treatments a woman can have to proceed with the abortion. For example a woman between 7 ? 15 weeks can take a pill which induces the same consequences of a miscarriage; an early medical abortion. This contrasts then with the late term abortion which relies on surgery and surgical instruments being used to extract and exterminate the foetus inside the womb. ...read more.

He wouldn?t agree with an induced miscarriage or termination. On the other hand theists like Joseph Fletcher would take an approach with the idea of love. Situation Ethics promotes the idea that an action should inflict the most loving thing. Therefore he would sympathise and take into account the woman?s choice of abortion in this case. I believe that the QOL vs. SOL argument is a very strong one indeed and one that won?t cease to exists as long as religious and moral principles remain in our world. The next topic I will go onto investigate is the idea of viability. Viability is the view that at what point should an abortion be acceptable, or viable? The law in the UK has the cut off point of up to 24 weeks which, with moral and religious principles, causes hindrance to abortion. The hindrance being with moral principles and the cultural evolution. There have been cases where, whilst in the same hospital, women at 22 weeks are going into a premature pregnancy, however another women at 24 weeks is having an abortion. The problem here is that, with the aid of modern day technology, the premature baby will go onto live a completely ?normal?, healthy life. Whilst the possible life of the 24 week foetus will lose its possible life. ...read more.

The final topics of abortion which, through religious and moral principles, are a hindrance are the methods and approaches to abortion. This key aspect of abortion one that does result in much conflict. For example, in China, with the aid of the One Child Policy, many women have faced the consequences of this police. A woman who was pregnant with a child at 8 months was forced to have a late medical abortion. This would have been a highly controversial and severe event which of religious and moral principles would conflict with Bentham?s principles of Utility. This act could some appropriate as it is benefitting the majority?s decision, in China, of the policy. Whereas on the other hand, with religious principles such as karma in Hinduism or the mitzvots in Judaism the hindrance would arise in the supposed ?immoral? act of this abortion. In my opinion this case study is highly controversial as it provides the idea of immorality, with principles causing hindrance within the medical ethic. Overall, when looking back at the statement, I think there is much truth and validity in the claim. However as I have investigated there were solutions that came from religious principles. But to conclude, this investigation has shown that medical ethics such as abortion will face challenges and hindrances with the presence of religious and moral principles and values. AO1 AO2 48 / 50 35 / 36 14 / 15 96% = A ...read more.