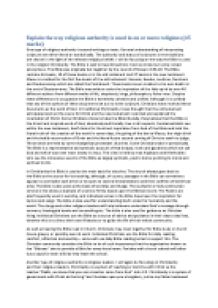 Religious authority. I will be focusing on the way the Bible is used in the religion Christianity.

﻿Explain the way religious authority is used in on or more religions (45 marks) One type of religious authority is sacred writings or texts. General understanding of interpreting scripture are either literal or symbolically. The authority and status of scriptures in the traditions are chosen in the light of the relevant religious beliefs. I will be focusing on the way the Bible is used in the religion Christianity. The Bible is said to have 40 authors most we know but some remain anonymous. The Bible was originally but together by the council of Nicea in 635 AD. The Bible contains 66 books, 39 of these books or in the old testament and 27 books in the new testament. Moses is credited for the first five books of the old testament: Genesis, Exodus, Leviticus, Numbers and Deuteronomy which are called the Pentateuch. These books cover creation to his own death at the end of Deuteronomy. The Bible was written under the inspiration of the Holy spirit by over 40 different authors from different walks of life, shepherds, kings, philosophers, fisher men. Despite these differences in occupation the Bible is extremely cohesive and unified. Although it is unlikely that any of the authors of these documents set out to write scripture, Christians have received these documents as the word of God. ...read more.

Christianity is a system of government with Christ as the king ?and I bestow upon you a kingdom, just as my father bestowed a one upon me? Luke 22:29. The role of Christian priesthood is not specified in the New Testament it has developed slightly form the Old Testament and its Jewish examples and also partly to the pagan priesthoods of the Roman Empire. There are 3 orders of priesthood in Orthodox, Roman Catholic and Anglican Christianity which are Bishops, priests and deacons. Bishops are drawn from the Apostles and help unite the community of the local church. They perform the entire range of religious services. The priest is subordinate to the Bishop and his powers are derived from them. A priest can perform all sacramental functions except ordination. The lowest rank is a deacon, who is usually a priest in training. All bishops together have joint authority to lead the church. The pope is seen as the first among equals. The protestant denomination has tended to ignore any sacramental and sacrificial authority as religious leaders and regard all Christians equally as priests before God. An example of a religious leader is the Pope. Pope Benedict XVI is the 265th Pope since the time of Jesus. He was ordained as a priest in 1951 and was elected Pope in April 2005. ...read more.

Many churches have traditional practices, such as particular patterns of worship or rites that have developed over time. Deviations from such patterns are sometimes considered acceptable of heretical. Similarly, traditions can be stories or history that are or were widely accepted without being part of Christian doctrine, e.g., the crucifixion of Saint Peter, which is widely believed to have happened but is not recorded in scripture. Examples of Christian traditions, can include marriage, baptism and Christmas. A way in which tradition is exercised in the Christian religion is through marriage. Marriage is the official unity of one man and one women under the eye of God. Marriage in a church has been carried out for many years and continues to be a major part of Christianty. Another way in which tradition is exercised is through confirmation/baptism. Baptism is the final step in the salvation process. Once you have accepted Jesus as your saviour and have repented of your sins you should be baptised. Baptism represents the death, burial and resurrection of Christ. When you go into the water this is the death and burial of your old sinful life, when you come out of the water is the resurrection to your new life, living for Christ instead of yourself, ?Anyone who believes and is baptised will be saved.? Mark 16:16. ...read more.