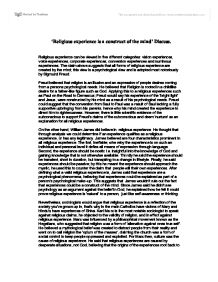 Religious Experience is a construct of the mind - Discuss

He said that religious experiences are caused by desperate situations, not God, believing that the origins of the experiences root back to the church. For Marx, religious experiences are not constructed by the mind. Instead, he believed the church constructed a mythological religion, which by implication caused oppressed people to have experiences of God. However, evidence in history conflicts with Marx's view of religion. For example, in the American civil rights movement, it was the Baptist church of Martin Luther King Jr, which pushed for liberation - not oppression. Equally in scripture, the story of Paul on the road to Demascus demonstrates how religious experience could lead to the 'good', in the way Saul was changed to a good man, Paul. This show's that Marx's wholesome condemnation of religion is flawed, in addition to this, there's no evidence to suggest the communist philosophy makes people happier. Alternatively, Alston argued how the views of sociologists and psychologists are unfair to reject religious experience. He'd have said it was unfair to say religious experiences were a constructed by the mind. Alston said in life evidence is what you can gain from experience. For example, if you heard a bird sing, or saw a red car, these would be vouched for by sensory evidence, and people would believe you. ...read more.