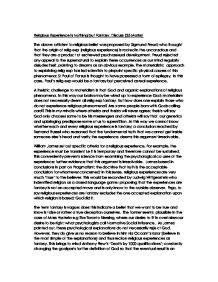 Religious Experience is Nothing but Fantasy. Discuss (35 Marks)

Religious Experience is Nothing but Fantasy. Discuss (35 Marks) The above criticism to religious belief was proposed by Sigmund Freud; who thought that the origin of relig exp (religious experience) is rooted in the unconscious and that they are a product of eschewed psychosexual development. Freud rejected any appeal to the supernatural to explain these occurrences as our mind regularly deludes itself, pointing to dreams as an obvious example. The materialistic approach to explaining relig exp has led scientists to pinpoint specific physical causes of this phenomena; St Paul of Tarsus is thought to have possessed a form of epilepsy. In this case, Paul's relig exp would be a fantasy but perceived as real experience. A theistic challenge to materialism is that God and organic explanations of religious phenomena. In this way our brains may be wired up to experience God; materialism does not necessarily deem all relig exp fantasy. ...read more.

This would be seconded by Ludwig Wittgenstein who indentified religion as a closed language game; proposing that the experiences are fantasy is not an accepted move and is only know to the outside observer. Ergo, to say religious experiences are fantasy excludes the one accepted explanation upon which religion is based; God did it. The term fantasy is vague; does this indicate a belief that we want to be true and know is false or rather a true deception ourselves. The former seems plausible in the case of Mass Hysteria e.g The Toronto Blessing, where our desire to fit in overtakes our desire to be right; what psychologists call Normative Social Influence. As James pointed out, these psychological explanations do not necessarily reject God. However, they do give us no reason to believe in him via Occam's razor (believe in the most simple of the explanations) ...read more.

Kant's reasoning is not the reason to reject religious experience as fantasy; as with religion there can only be one wholly true explanation of religious phenomena. Only one religion can be wholly true as they make incompatible claims; and so we must dismiss most religious experiences as fantasy. And if we reject most religious experiences, then those remaining must be of the same psychological nature so they too can be dismissed as fantasy. James's pluralism is merely another get out clause; another 'death by 1000 qual' which offers no explanation to how faiths are linked, and is infinitely less simple than materialism. In conclusion, not every criticism levelled against religious experience is sound. However, only one is sufficient; that because we can track the experience of God to psycho/physiological phenomena, there is no reason left to believe in God even though the two are not mutually exclusive. Since the debate cannot be resolved ala Russell, we must assume the answer is not the theistic one. ...read more.