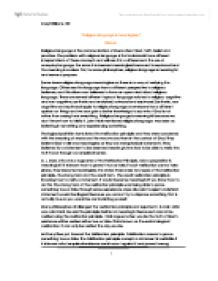 He said Flew missed the point that believers have a commitment to trust in God based on their faith, and for this reason they do not allow evidence to undermine their faith. Mitchell says they look for answers to prove to themselves God exists. He also mentioned the death of a thousand qualifications. R. M. Hare stated falsification can be used for cognitive statements but it cannot be used for non cognitive statements because religious language cannot be falsified but it doesn't mean it has no meaning. He used the example of the student. The student was convinced dons were going to kill him and he wouldn't accept any evidence against them not wanting to kill him. Even though he wouldn't accept any evidence against his belief, it is meaningful to him because of what he thought. Hare also went on to say that looking at the world in this way is seen as a "blik." Religious beliefs are bliks because of the impact they have on every individual's life and the way believers look at their lives that is different to somebody else's. R. B. Braithwaite wanted to prove religious language has a purpose because it has the function of conveying ideas and in itself makes it meaningful. He said the errors of the Verification and Falsification Principles had been to treat religious language as cognitive language when it is actually non cognitive. As it is based on our emotions, it can be very hard to prove something meaningful based on emotions as everyone's emotions are different. ...read more.