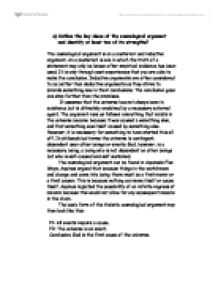 The cosmological argument can be found in Aquinas’s Five Ways, Aquinas argued that because things in the world move and change and come into being there must be a first mover or a first causer. This is because nothing can move itself or cause itself. Aquinas rejected the possibility of an infinite regress of movers because this would not allow for any subsequent movers in the chain.

The basic form of the theistic cosmological argument may then look like this:

P1: All events require a cause.

P2: The universe is an event.

Conclusion: God is the first cause of the universe.

If we accept these two premises, then it may be that we will consider the conclusion to be at least probable, if we have good reasons to think that God is a likely, or even most likely, cause of its existence. In conclusion Aquinas drew the conclusion that the first mover and the first cause had to be God, the all-powerful being that sets everything else in motion.

His argument was a Christian one although it was based on The Kalam argument, which is an Islamic on. This rejects the idea of an infinite universe, since as time is always being added on – time cannot be infinite. Although the argument is fundamentally Islamic, and dates from the 9th Century CE, it was “discovered” in the western world by William L. Craig, who revised it slightly. The argument goes that if the universe was infinite then all of time would exist simultaneously, just as on an infinitely long shelf of numbered books, there will be equally as many even numbered books as odd numbered books. From this principle the Kalam argument goes on to say that there must have therefore been a point at which the universe began, and if it did begin, it must have been caused by something external to itself because the universe could not have been naturally occurring, since before the universe there was no “natural”, and this external being must have chosen to create the world.

Aquinas’s third way is the Argument from Contingency. This argument states that things are contingent, i.e. it is equally possible for them to exist or not exist. This means that there must have been a time when nothing existed, and, since something can’t come from nothing there must be something external which created the something out of the nothingness. This external being who is external to existence must have caused us, and we call such a being God.

Another key version of the Cosmological Argument is Leibniz’s Principle of Sufficient Reason. Leibniz proposed this argument in his book ‘Theodicy’, in it he says that the natural state of “things” is for there to be nothing, surely it’s easier for there to be nothing than something? Leibniz then goes on to say that nothing can turn itself into something,and our very existence shows that nothing did turn into something else, there must have been some external force which caused it to do so. Leibniz points of example in out world of this principle, he says that things have causes which are external to themselves, the fact the book is there is because I put it there, and if the book moved itself then it must have had a reason to do so, in which case the cause of the movement is still external to the moved item.

David Hume is thought to be the best-known critic of the cosmological argument. He argued that Aquinas made too many assumptions, such as that there needs to be a first cause and that the first cause has to be God. It is only within our experience that we see things as the product of a cause and there is no reason why this should apply to the universe. Hume used the example of Billiard balls to make this point. While we watch the balls on the table we may see the white ball move across the table and hit the red ball. When the red ball moves we witness the effect, the red ball moving, but we can only assume the cause, the white ball pushing it, to have happened. By using this example Hume aimed to question causal chains, which are assumed in the cosmological argument.

He also argues that we do not have sufficient experience to assume the creation of the universe. We have no evidence available as to how universes are actually created. We cannot know for certain what caused the universe.

Another philosopher who rejects the cosmological argument is Immanuel Kant, he was both an empiricist and a rationalist and therefore we call him an idealist. He was a very religious man who felt it was essential to preserve the foundations of Christian belief. He argued that the idea that every event must have a cause only applied to sense experience and that it could not be applied to something we have not experienced. Therefore he accepted no justification for the conclusion that God caused the universe. He argued that it is not valid to aim to understand things, which transcend our experience.

Kant also argues that there is a wide division between the world of senses and that of the divine. Our world and our data can never bridge this gap. We are trying to understand the divine through our understanding and our senses and this does not work. He finally objects to Aquinas trying to find God through human experience because he said our minds have insufficient data to come to a conclusion.

In conclusion it would be thought that the cosmological argument is quite strong in areas, however, there are many philosophers who can give examples to why it may not be all correct.