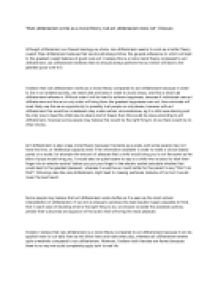 to feed the child was to steal a loaf of bread, then this would be okay according to act utilitarianism, however some people may believe this would be the right thing to do as there would be no other choice. Act utilitarianism is also a less moral theory because it remains as a scale, and some people may not have the time, or intellectual capacity even if the information available in order to make a choice based purely on a scale, for example the amount of pleasure that a child would bring you is not the same as the slice of pizza would bring you. ...read more.