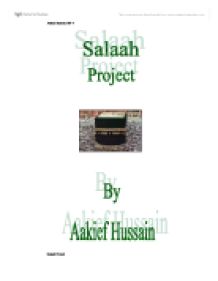 Salaah, the second pillar of Islam.

1. Introduction 2. Purpose of prayer 3. Conditions of prayer 4. Timings of prayer 5. Wudu 6. The prayer call 7. The performance of prayer 8. Types of prayers 9. Conclusion In this project I will propose to deal with one of the most important major exercises of faith as laid down by Islam. This is prayer (Salaah). Salaah is the second pillar of Islam. It refers to the five compulsory daily prayers. Salaah is the most special act of worship, which a Muslim can do for Allah. The word Salaah, itself, literally means 'Connection.' So the act of Salaah is our way of making a 'connection' with our Lord, Allah. There are many versus of the Qur'an and many sayings of the blessed Prophet which call us to this important act. We offer Salaah to remember Allah. It brings us closer to Him. The Qur'an says: 'Indeed, I am Allah; there is no god except Myself; so worship Me and establish Salaah to remember Me.' (20:14) Islam is known as the foundation of Religion. After accepting the truth of the Shahadah, Salaah is the doorway to knowledge. Salaah is the key to paradise. Allah reminds us in the Qur'an of the importance of Salaah again and again, telling us everything about it from the rewards of it to the punishments of it. The word 'Ibadah' comes from the Arabic "Abd", which means slave or servant. ...read more.

There is no Adhan (call for prayer) or Iqamah (second call before congregation). The Eid prayer consists of two raka'at (offered just as the two raka'at of Jumu'ah prayer are said) with six to sixteen additional Takbirs (ALLAHU AKBAR). You say three or more Takbirs in the second raka'at before you bow down for Ruku. The Imam (leader of the prayer) delivers a sermon (Khutbah) after the two raka'at Eid prayer unlike the Jumu'ah prayer when it precedes the prayer. The presence of all Muslims, women and children included is strongly recommended. By now you should have a very clear understanding of how important Salaah is, and why we have been recommended many times by the Prophet and Allah through the Qur'an and Hadith. Without prayer a Muslim is incomplete and he should realise this. However many young Muslims have chosen to go astray and follow the non-believers and their actions. May Allah guide us to the way of His Prophet Muhammad (peace and blessings be upon him) and keep us away from going astray and following false desires. May Allah accept our prayers and grant us good rewards for them. To gather various types of information I used a few books that I thought would be most appropriate. I used the following books to extract information and include it in my project: 1. Islam Beliefs and Teachings (Ghulam Sarwar) 2. Islam in Focus (Hammudah Abdalati) 3. Salaah (The Muslim Prayer) (Islamic Dawah Centre International) Aakief Hussain-BY 9 Salaah Project ...read more.