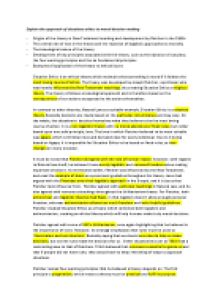 ﻿Explain the approach of situations ethics to moral decision making * Origins of the theory in New Testament teaching and development by Fletcher in the 1960s * The central role of love in the theory and the rejection of legalistic approaches to morality * The teleological nature of the theory * Development of key principles associated with the theory, such as the rejection of casuistry, the four working principles and the six fundamental principles * Examples of application of the theory to ethical issues Situation Ethics is an ethical theory which maintains that something is moral if it follows the most loving course of action. The theory was developed by Joseph Fletcher, a professor who was heavily influenced by New Testament teachings, thus making Situation Ethics a religious theory. The theory is follows a teleological approach and is therefore based on the consequences of our actions as opposed to the actions themselves. In contrast to other theories, Natural Law as a suitable example, Situation Ethics is a relativist theory. Basically decisions are made based on the particular circumstance and may vary. On the whole, the situationist decides themselves what they believe to be the most loving course of action. It is a non legalistic theory with no moral absolutes or fixed rules, but rather based upon one solid principle, love. ...read more.

Relativism maintains that there are no fixed rules or moral absolutes, and each circumstance varies so decisions should be made at the moment. Furthermore, the third principle Fletcher stated was personalism, which emphasises the need to put people before rules, and that personal relationships are more important. Last of all, there is positivism, which states that faith in Christ is voluntary, and that once one chooses to follow Christ they then can follow his guidelines and live by his standards. The six fundamental principles were the last set of key principles added by Fletcher. These principles form Situation Ethics. The first one is that ?Love is always good?, which basically means that if people are helpful, then it is moral, however if they hurt people the action is immoral. Next there is ?Love is the ruling norm? which basically means that love replaces legalism, such as Paul replacing the Torah with love. Following this, there is ?love and justice are the same?, here Fletcher is basically saying that love depends on justice, just as justice depends on love. The fourth principle is ?Love your neighbour?, which means that agape should be given to all, and one should not always expect in back. Furthermore, there is ?the end justifies the means? which refers back to Situation Ethics being a teleological theory, based on our consequences. ...read more.

Although lives would be lost in the process of dropping the bomb, it is loving in that many more lives would be saved. Situation Ethics keeps is central focus on love when making all decisions., which therefore means it somewhat rejects legalism approaches to morality. Overall, Joseph Fletcher felt that there were only three general approaches to ethics, which include the legalistic approach, the antinomian or lawless approach, and the situational approach. Even though Fletcher did accept the role of human reason in moral decision making, he felt that approaches like that of Natural Law were too legalistic and on most occasions human need should be given first place to rules. This was influenced by Jesus? criticism of the Pharisees legalism in the Gospels of the Bible. Vardy and Grosch comment that because Jesus ?attacked the Pharisees? insistence on following the Jewish Law cannot and should not lay down any law. When they do, they become more like Pharisees.? However, in saying this, Fletcher also rejected antinomian approaches to moral decision making, as he felt that those who took a purely hedonistic approach had too much moral freedom. This is how Fletcher attempted to produce a theory which was between legalism and antinomianism- ?Fletcher maintained that there was a middle way between legalism and antinomianism and this lay in the application of agape, the love that Jesus commanded. ...read more.