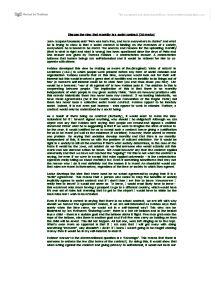 Discuss the view that morality is a social contract (30 marks) Jean-Jacques Rousseau said "Man was born free, and he is everywhere in chains" and what he is trying to show is that a social contract is binding on the members of a society, everywhere he is bound to be moral. The sources and reasons for the upholding morality (that is what is right and what is wrong) has been questioned since the days of Plato and one answer was given by Thomas Hobbes - a contractarian answer. A contractarian believes that human beings are self-interested and it would be rational for him to co-operate with others. Hobbes developed this view by making us aware of the (imagined) 'state of nature' in Leviathan (1651) in which people were present before any form of social cohesion and organisation. Hobbes asserts that at this time, everyone would look out for their self-interest but this would involved a great deal of hostility and an inability to do things out of fear (a human's self-interest could be to steal from you and thus cause you fear). Life would be a torment; "war of all against all" is how Hobbes puts it. The solution to this is cooperating between people. The implication of this is that there is no morality independent of what people in any given society think. ...read more.

This did not happen. All but one, were left clinging on to the rope. What's even more so apparent is that if I am sure that I will get away with doing something "immoral", why shouldn't I do it? If I knew I wasn't going to be caught stealing money then it would be in my self-interest to steal it. Hobbes' answer to the aforementioned question is a 'Sovereign'. This means that there is someone to enforce the law (the terms of the contract). By doing this, it would show that when acting against the contract and giving primacy to self-interest, it would not be in our long term self-interest to do so. However this still doesn't answer the question as to why someone who knows they will not get caught should be moral. Indeed, there are many people who are criminals and it is only found out after they have died. Also, there seems to be a different argument put forward by David Gauthier who argues that to there is no need for a sovereign because those of us who have dispositions to altruism, will in the long term have more benefits than those who are shot-sightedly self-interested. This view is strong in the sense that it shows that human beings are genuinely altruistic with a purpose of doing so and thus not having an over pessimistic view of humans (thus the lesser need for a sovereign). ...read more.

This, of course, is not the only alternative view - others view moral as what the Bible says or even the Quran. We could even take the utilitarian approach and say that what is moral is the thing that obtains the greatest number of people's happiness. To take this view is, as said, to ignore every instance of altruism. However what about blatant acts of altruism? The egoist could say that subconsciously we gain self-gratification from doing right things. However, again, it does not follow that I am doing these things because I want self-gratification. In the case of Mother Teresa, it is not plausible that she only did those things because she wanted self-satisfaction. As the egoist claims that everything is in some way selfish, it negate the idea of selfish and selfless as it distorts the distinction and leaves nothing but motives - which is not a direct accurate description of the world. Thus to conclude, to hold the view that morality is defined, described and prescribed by a social contract ultimately fails. Alternative ideas not only, in some cases, have scientific backing but also have a more accurate representation of the real world. The view is both pessimistic and would lead to the powerful being on top and the weak being exploited. Thus we must conclude as Hume did and say that there is not historically validity (among other things) to this claim. ...read more.