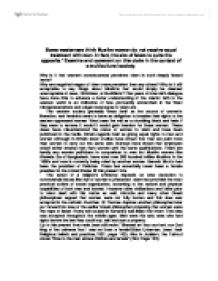 Some westerners think Muslim women do not receive equal treatment with men. In fact, the aim of Islam is quite the opposite.' Examine and comment on this claim in the context of a multicultural society.

Some westerners think Muslim women do not receive equal treatment with men. In fact, the aim of Islam is quite the opposite.' Examine and comment on this claim in the context of a multicultural society. Why is it that western consciousness perceives Islam in such deeply flawed terms? Why are negative images of Islam more prevalent than any others? Why is it still acceptable to say things about Muslims that would simply be deemed unacceptable of Jews, Christians, or Buddhists? That years of inter-faith dialogue have done little to advance a better understanding of the Islamic faith in the western world is an indication of how profoundly entrenched in the West misrepresentations and vulgar stereotypes of Islam are. The western society generally views itself as the source of women's liberation, and feminists seem to have an obligation to broaden their rights to the eastern oppressed women. West sees the veil as a stumbling block and feels if they were to remove it would it would gain freedom for these women. These views have misunderstood the status of women in Islam and have been publicized in the media. Britain regards itself as giving equal rights to men and women Although in Britain latest studies have shown that men are paid more than women to carry out the same task. Surveys have shown that employers would rather employ men than women with the same qualifications. There are hardly any women politicians in comparison to men but Muslim women like Khaleda Zia of Bangladesh, have ruled over 300 hundred million Muslims in the 1990s and now is currently being ruled by another women. Benazir Bhutto had been the president of Pakistan. There has essentially never been a female president in the United States till this present time. The extent of a religion's efficiency depends on what resolution to controversial issues like that of women is presented. ...read more.

A woman has the right to choose who she marries and shouldn't be forced to marry anyone with out her wish. She can even have her marriage annulled in a court of law if she can prove that her parents/guardians went ahead with it against her will. Yet there is a resounding silence when the issue being raised is Female Genital Mutilation (FGM), honor killings, forced marriages, the unequal application of hadd punishments on women, or the denial of education to girls and women. All of these wrongs are perpetrated on women in the name of Islam. Genital mutilation for females is not allowed in Islam? Prophet Muhammad peace be upon him clearly prohibited mutilation or maiming of the body. While it is true that many of these violations occur across cultural and religious boundaries, the only action often taken by conservative Muslims is a condemnation of the action because it is "cultural" and not Islamic. Meanwhile, women continue to be murdered and little girls continue to be mutilated. Polygamy is a misunderstood phenomenon that is more a remedial law in Islam than anything else, used only if necessary. Monotheism is a norm in Muslim societies past and present, and one must remember that prior to Islam, men could have as many wives as they desired. so much that many women were deserted for long periods of time. The verse in the quran that legitimates polygamy was revealed after the battle of uhud, when many widows and orphans were left without care. Hence at the time polygamy was the answer. Although in some extreme circumstances e.g.when the wife is a barren, seriously ill, and mentally unstable or has a bad character. In these cases a man can marry again if he feels the presence of the second wife will benefit the wife, the children or him. However Islam insist that the man treat both wives equally in every aspect possible.The quran says: If you fear that you will not be able to deal justly ...read more.

and I have come to seek your advice." He said, "Then remain in your mother's service, because Paradise is under her feet." The Prophet's followers accepted his teachings and brought about a revolution in their social attitude towards women. They no longer considered women as a mere chattels, but as an integral part of society. For the first time women were given the right to have a share in inheritance. In the new social climate, women rediscovered themselves and became highly active members of society rendering useful service during the wars which the pagan Arabs forced on the emerging Muslim umma. They carried provisions for the soldiers, nursed them, and even fought alongside them if it was necessary. It became a common sight to see women helping their husbands in the fields, carrying on trade and business independently, and going out of their homes to satisfy their needs. "Among my followers the best of men are those who are best to their wives, and the best of women are those who are best to their husbands. To each of such women is set down a reward equivalent to the reward of a thousand martyrs. Among my followers, again, the best of women are those who assist their husbands in their work, and love them dearly for everything, save what is a transgression of Allah's laws." The Shari'ah regards women as the spiritual and intellectual equals of men. The Shari'ah requires a man, as head of the family, to consult with his family and then to have the final say in decisions concerning it. In doing so he must not abuse his prerogative to cause any injury to his wife. The words of the Prophet (peace be upon him), 'the queen of her house', and this is the position a true believer is expected to give his wife. In contrast to these enlightened teachings of Islam in respect of women, Western talk of women's liberation or emancipation is actually a disguised form of exploitation of her body, deprivation of her honour, and degradation of her soul! http://www.allaahuakbar.net/womens/rights_of_women_guaranteed_by_islam. ...read more.