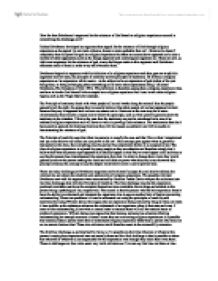 The first challenge was that the experience produced unreliable results or the recipient themselves were unreliable due to drugs and alcohol or the person being a pathological liar, respectively. The second is that the person who had the experience doesn't have the ability to understand and interpret the experience due to age or another form of barrier preventing understanding. These two problems it is can be addressed not using the principles of credulity and testimony but using William James who argues that an experience being induced by drug etc does not make it less credible as the substance enhances the understand of an experience when it that state and even if some of the understanding is lost when a normal state is returned there will still be retained sense of profound experience. William James also argues that that because someone has a barrier affecting understanding for example neurosis it doesn't mean they are not having religious experiences it is possible that neurosis make a person more able to understand religious experience better than a person who does not so we cannot dismiss what. These two criticisms would therefore seem to be successfully overcome. The third key challenge as summarized by Davis is if it possible to show that whoever or whatever the person is saying they experienced was not actually there and the final challenge ...read more.

God we will find it incredible and who is to say whether my view on God's nature is right or the subjects view. Lastly the problem Davis raises with the definition is that it excludes aspects of nature-mysticism which affect many of the testimonies from new age religious movements or Buddhism that some people class as religious experiences and could be useful in proving God's existence. Swinburne argument does not appear to have much or a response to the last three challenges/criticisms and therefore does not succeed in overcoming them. In conclusion it would look as if though Swinburne's argument for the existence of God based on religious experience does successfully overcome some of the challenges made against it, such as the four key points, but does not overcome them all. Although the fact it doesn't overcome all of the challenges put forward by Davis it raises some questions Swinburne's argument is still a very strong argument as he does not claim that one persons religious experience can irrefutably prove that God exists but uses religious experience as part of an accumulative approach towards make this conclusion. Overall it would therefore seem that Swinburne is fairly successful in overcoming the challenges made against was he says as he addressed many of them and the argument has not disintegrated because of the challenges made against it. ...read more.