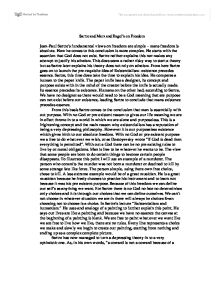 Sartre and Marx and Engel's on Freedom Jean-Paul Sartre's fundamental views on freedom are simple - mans freedom is absolute. How he comes to this conclusion is more complex. He starts with the assertion that God does not exist. Sartre neither explains this nor makes any attempt to justify his atheism. This does seem a rather risky way to start a theory but as Sartre later explains his theory does not rely on atheism. From here Sartre goes on to launch the pre-requisite idea of Existentialism- existence precedes essence. Sartre, this time does take the time to explain his idea. He compares a human to the paper knife. The paper knife has a designer, its concept and purpose exists with in the mind of the creator before the knife is actually made. Its essence precedes its existence. Humans on the other had, according to Sartre, We have no designer as there would need to be a God meaning that are purpose can not exist before our existence, leading Sartre to conclude that mans existence precedes essence. From this basis Sartre comes to the conclusion that man is essentially with out purpose. With no God or pre existent reason to gives our life meaning we are in effect throne in to a world in which we are alone and purposeless. This is a frightening concept and the main reason why existentialism has a reputation of being a very depressing philosophy. However it is our purposeless existence which gives birth to our absolute freedom. With no God or pre existent purpose we a free to do what ever we wish, or as Dostoyevsky wrote "If God is dead then everything is permitted". With out a God there can be no pre existing rules to live by or moral obligations. Man is free to be whatever he wants to be. The view that some people are born to do certain things to become certain people disappears. ...read more.

Because of Yossarian's reduced amount of power he is not free to simply go home as he wants, he must face one of the unpleasant choices presented to him. Yossarian does freely act in the situation by running away, and like all good existentialists he acts authentically taking full responsibility for his actions. For Sartre, mealy sating and explain that some peoples freedom is limited by there power is not enough and goes forward to try and solve this problem by combining his existentialism with Marxist ideas. Marx and Engels views on Freedom Marx and Engels views on freedom differ considerably from Sartre's. Sartre's existentialism is a theory of freedom whilst Marxism presents its self as a political practice with underlying issues of freedom. Marx and Engels differ greatly form Sartre in their approach to mans freedom. They offer a materialist view which can be seen in this quote from Marx "It is not the consciousness of men that determines their existence, but, on the contrary, their social existence that determines their consciousness". What the two mean by this can illustrated by looking at primitive people. In early stages of humanity mans existence was entirely driven by its basic needs. People did not concern themselves with literature, sports or music because their material surroundings had not developed that way. As societies developed and became more complex so did the peoples existence. It is the Material conditions of the time which determine the ideas of that time Marx and Engels interpretation history and its development as being cased by its economic base is known as Historical Materialism. According to Marx and Engels there have been four stages in historical production. The first being a primitive form of communism before societies existed. There was no concept of private property or class the people of the tribes would work together in order to ensure the survival of the tribe. ...read more.

(Need to expand this point) Despite the two theories initially appearing poles apart we are able to see many similarities between the two even before Sartre moved his theory to incorporate Marxist ideas. Firstly both theories place an emphasis on action over ideas. Marx and Engels consider ideas to be nothing with out action or praxis behind them and that to change the world one must act and not contemplate. Sartre holds similar views; in "existentialism and humanism" he disagrees the notion that a existentialism is contemplative and instead asserts that existentialism, like Marxism, believes in action above contemplation. Sartre we must choose to define our selves and carry out our choices through action. 'The genies of Proust is in the works of Proust' this quote illustrates Sartre's view that in order for us to be anything we must act. Further more Marx and Engels believe in a similar idea to Sartre on the developing nature of the individual and their potential to define themselves. Marxism follows the belief that because of our alienation we are unable to for fill our true potentials. Marx and Engels believe that only once the communist state is born will man be truly able to reach there potential to develop by working what ever sphere of activity. Unlike Sartre, Marx and Engels do take in to account mans circumstances when concerning his abilities to create himself showing the theory to be a more realistic account of mans ability to create themselves. Sartre's existentialism has a more optimistic view off human freedom. Marx and Engel's tell us we can't be free under capitalism, on our own we can never be free and that in order to be free we must rise up along with the whole world. In Marxism the individual does not have much control over freedom and as we only have control of the individual this leaves us in a position of weakness and uncertainty. ?? ?? ?? ?? ...read more.