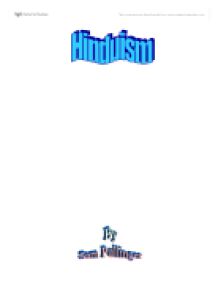 The Beginning Of Hinduism.

The Beginning Of Hinduism Hinduism is the oldest of the major world religions. It began so long ago that no one really knows how old it really is, but it goes back at least 5000 years. The Hindus think it has always existed. The name 'Hindu' comes from an old name for people who lived in a part of northern India. The word 'Hindu' comes from the River Indus and in the beginning it described where people lived, not their religion. The Persians were the first people to use the name. There were people living near the River Indus about five thousand years ago. They built large cities and one of them was called Mohenjo-daro. Some archaeologists have dug the city up and discovered many things about the Indus people and their civilization. Today, over 800 million people living in India are Hindus, and there are the same number living in other parts of the world. Hinduism was not begun by any one person but it developed gradually over more than a thousand years. This means that today it has many different 'branches' and its followers have a very wide range of beliefs and ways of worshipping. ...read more.

They had to have their own well, could only travel by train if it had a compartment for them, and they are some of the poorest people in Hindu society. Strict Hindus only mix and eat with their own caste, and they do not marry outside their caste. Even though it is illegal to discriminate against anyone from another caste, many Hindus still prefer to keep to their own caste. The Goal of Hindus Each Hindu has to have a goal, which is for the soul to be free from samsara or being reborn. They have to work out the best way to reach this goal. They have to make sure that each rebirth takes the soul to a better life. A bad life is a demotion, a good life a promotion. Each promotion means that the next person the soul lives in will be able to understand more about the world and Brahman. It usually means that the soul is born into a person who belongs to a higher caste. If you try really hard to obey your dharma, your soul may go one step further, but the position a person starts at depends on the karma the soul has brought from the previous body. ...read more.

A Hindu who does his best to lead a good life will be paying back what he owes to God, to his family and to wise Hindus who have lived before him. When a Hindu goes to make an offering, he puts his hands together and bows. He says, "Namaste", which means, "I bow to your respect". They also do this when they greet people and they can touch the feet of a person who is older or wiser than they are. They also believe that they should not harm any living things, which means that many of them are vegetarians. In Hinduism cows are very sacred and they should never be killed. This means that nobody mistreats a cow and they are allowed to wander in the streets with nobody chasing them away. A very important place in a Hindu home is the kitchen and the mother is very strict about what happens there. If a lower caste person has washed the dishes then the mother must wash them again to make them pure. A lot of Hindu women wear saris. This is a length of cloth over five metres long which is wrapper around the waist and the end is put over her shoulder. They are usually brightly coloured and made of silk or cotton. ...read more.