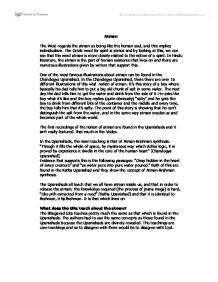 The concept of Atman

Atman The West regards the atman as being like the human soul, and this implies individualism. The Greek word for spirit is atmos and by looking at this, we can see that the word atman is more closely related to the notion of a spirit. In Hindu literature, the atman is the part of human existence that lives on and there are numerous illustrations given by writers that support this. One of the most famous illustrations about atman can be found in the Chandogya Upanishad. In the Chandogya Upanishad, there there are over 16 different illustrations of this vital notion of atman. It's this story of a boy where basically his dad tells him to put a big old chunk of salt in some water. The next day the dad tells him to get the water and drink from the side of it. ...read more.

The Upanishads all teach that we all have atman inside us, and that in order to release the atman; the knowledge required (the process of jnana mega) is hard, "Like pith extracted from a reed" [Katha Upanishad] and that it is identical to Brahman, it is Brahman. It is that which lives on What does the Gita teach about the atman? The Bhagavad Gita teaches pretty much the same as that which is found in the Upanishads. The authors had to use the same concepts as those found in the Upanishads because the Upanishads are divinely revealed. The teachings are core teachings and so to disagree with them would be to disagree with God. The gita also teaches that atman is in everyone, and that atman is immortal. The following passage found within the Gita supports this;"who thinks that he can be a slayer? ...read more.

In his scholarly writings, Bowen says that "the atman is clothed with, though not limited by the psychological components of the individual personality." The author of the Gita makes a very big deal that the outward physical body is very different to the inmost self and when a person dies, this marks the end of the physical body but not the atman. The atman is a key idea within Hinduism, and it is essential in order for us to gain a good understanding about Hindu ethics. Without atman, the concept of samsara, the wheel of transmigration and the ultimate aim of Moksha, Hinduism wouldn't make sense. The concepts of Moksha and samsara would be scientifically inexplicable and would therefore ultimately fail if the concept of atman were not accepted. Because of this, atman is vital to the religion. Hinduism would not be able to support itself as a religion without this concept, and therefore it's essential that we understand just how important the concept of atman is to Hinduism. ...read more.