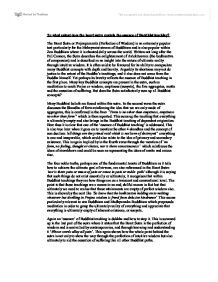 To what extent does the heart sutra contain the essence of Buddhist teaching? The Heart Sutra or Prajnaparamita (Perfection of Wisdom) is an extremely popular text particularly for the Mahayanist stream of Buddhism and is also popular within Zen Buddhism where it is chanted daily across the world. Written not long after the Pali Cannon, the Sutra describes the enlightenment of Avlokitesvara (the bodhisattva of compassion) and is described as an insight into the nature of ultimate reality through intuitive wisdom. It is often said to be favoured for its ability to encapsulate many Buddhist concepts with depth and brevity. Arguably its shortness may not do justice to the extent of the Buddha's teachings, and it also does not come from the Buddha himself. Yet perhaps its brevity reflects the essence of Buddhist teaching in the first place. Many key Buddhist concepts are present in the sutra, such as meditation to reach Prajna or wisdom, emptiness (sunyata), the five aggregates, anatta and the cessation of suffering. ...read more.

The four noble truths, perhaps one of the fundamental tenets of Buddhism as it tells how to achieve the ultimate goal of nirvana, are also referenced in the Heart Sutra: 'nor is there pain or cause of pain or cease in pain or noble path' although it is saying that such things do not exist essentially or ultimately, it recognises that within Buddhist teachings they are how things are on a transient and conventional level. The point is that these teachings are a means to an end, skilful means in fact but that ultimately we need to realise that these attainments are empty of perfect wisdom also. This is shown by the next like 'So know that the bodhisattva holding on to nothing whatever but dwelling in Prajna wisdom is freed from delusive hindrance' This seems particularly relevant to zen Buddhism and Madhyamaka Buddhism which propounds meditation in order to grasp the ultimately reality of everything and appreciate that everything is ultimately empty of inherent existence, or sunyata. ...read more.

The pinnacle and ultimate point of Buddhism is seeing things the way they really are in order to stop suffering and this is clear in the sutra. The Heart Sutra could be said to contain the essence of Buddhist teaching in as far as it describes the cessation of suffering as the ultimate goal, the importance of anatta and the four noble truths. One could say that as the sutra only mentions compassion implicitly it is lacking somewhat in 'summing up' Buddhism. It reinforces the ideals of Madhyamaka and Zen Buddhism that everything, even everyday Buddhist teachings, are ultimately empty and that one should focus on attaining perfect wisdom in order to understand this and be free from samsara, (which as stated in verse 4 is no different from nirvana, but a different understanding). It could be said to be that the epitome of Buddhist teachings particularly are present within the Heart Sutra; the cessation of suffering for all sentient beings and so arguably the Sutra does contain, in a sense, the essence of Buddhist teaching. ...read more.