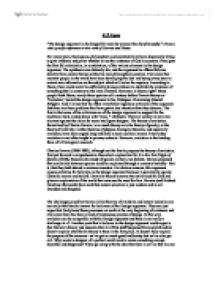 &quot;The design argument is challenged far more by science than by philosophy.&quot; Discuss with specific reference to the work of Darwin and Hume.

R.S Essay "The design argument is challenged far more by science than by philosophy." Discuss with specific reference to the work of Darwin and Hume. For many years, theologians, philosophers and scientists have been desperately trying to give evidence and prove whether or not the existence of God is accurate. Plato gave the first full articulation, in combination, of the various elements in the design argument. The synthesis was distinctly his, and the argument he offered follows directly from central themes within his own philosophical position. Ever since that moment people in the world have been developing the idea and trying every year to extract new information on the subject which will solve the mystery. According to Hume, there could never be sufficiently strong evidence to establish the existence of something that is contrary to the laws of nature. However, is Hume right? Many people think Hume, nearly three-quarters of a century before Darwin theory on 'Evolution', buried the design argument in his Dialogues Concerning Natural Religion. And it is true that he offers remarkably ingenious criticism of the argument. But there are three problems that have gotten less attention than they deserve. The first is that some of his criticisms are of the design argument as support for the traditional God, loaded down with "omni-" attributes. ...read more.

Why is there so much beauty in the world? On the other side you ask yourself the question why is there so much evil as well. All in all the good and evil probably balance each other out. The fact remains that there are scientific problems with Darwinism that are quite independent of what anybody thinks of in the Bible. In addition, the doctrine of Darwinism can be shown to be a philosophical assumption not proved by scientific observation. Intelligent design includes a belief in God, Darwinism includes a belief in materialism. Both are "religious" or philosophical worldviews. Materialism did not found modern science, Theism (the belief in God) did (Pascal, Newton, Farraday, etc) There is a difference between origin science (a type of forensic science which looks into evidence for past events) and operation science (which is observation of current events). Hume was correct in that people do demand more evidence to back up claims to have witness an extraordinary event than for an ordinary one. According to Hume, there could never be sufficiently strong evidence to establish the existence of something that is contrary to the laws of nature. But, is he right? To use Hume's words 'lead cannot, of itself, remain suspended in the air' because we have repeated observed that it falls to the ground when we drop it. ...read more.

Or perhaps the world was perfect at the start like the Garden of Eden but has fallen from the grace of His initial design. Hume criticises the conclusion to the argument being God of Christianity or Islam but why shouldn't there be a team of Gods? However, on the other hand, the idea of one God having made the whole world is integral to the Bible and Christian tradition whereas the idea of a team of Gods has no philosophical framework or support. The Anthropic principle (the fact that the universe has been set up to produce us) seems to support the Design argument as well. You could say that the Design Argument is philosophically flawed as a proof but is still very good as a probability argument (Tennant). Hume shows that the argument isn't proof. It was never going to convince an atheist for the existence of God but, as part of all the cumulative evidence, it makes God's existence a lot more probable. In conclusion, which is actually the bigger challenge science or philosophy? Darwin can't explain the goal of evolution so he doesn't get rid of the idea of the designer. So, in effect Darwin's theory can work in tandem with the Design argument. On the other hand, some say that Hume destroys the Design argument whereas others say that it is just there as evidence for people who already believe. However, should you need proof? All in all, science provides evidence against the argument whereas philosophy only provides ideas and arguments. ...read more.