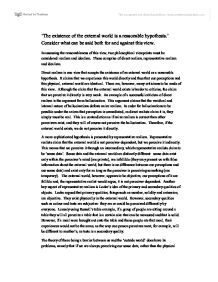 The existence of the external world is a reasonable hypothesis. Consider what can be said both for and against this view.

'The existence of the external world is a reasonable hypothesis.' Consider what can be said both for and against this view. In assessing the reasonableness of this view, two philosophical viewpoints must be considered: realism and idealism. These comprise of direct realism, representative realism and idealism. Direct realism is one view that accepts the existence of an external world as a reasonable hypothesis. It claims that we experience this world directly and thus that our perceptions and this physical, external world are identical. There are, however, many criticisms to be made of this view. Although the claim that the external world exists is harder to criticise, the claim that we perceive it directly is very weak. An example of a successful criticism of direct realism is the argument from hallucination. This argument claims that the veridical and internal nature of hallucinations defeats naive realism. In order for hallucinations to be possible under the axiom that perception is unmediated, as direct realists claim it is, they simply must be real. This is a contradiction as if naive realism is correct then other perceivers exist, and they will of course not perceive the hallucination. ...read more.

However, secondary qualities such as colour and taste are subjective: they are or could be perceived differently by everyone. Loosely using Russell's table example, if a group of people are sitting around a table they will all perceive a table that is a certain size that can be measured and that is solid. However, if a meal were brought out onto the table and those people ate that meal, their experiences would not be the same, as the way one person perceives meat, for example, will be different to another's, as taste is a secondary quality. The theory of there being a barrier between us and the 'outside world' does have its problems, namely that if we are always perceiving our sense data, rather than the physical world, what evidence is there to prove that the physical world exists at all? A representative realist may argue that our being unable to create sense data at will shows that something outside of ourselves must be causing them, but this argument is not totally logically consistent. ...read more.

Berkeley's answer lies in religion. He argued that since there is an omnipresent God, everything is always being perceived, therefore everything always exists. So what seems like an argument against the existence of an external world (if Berkeley's view were correct the world would be external to us, but not to God) is actually nothing of the sort, since Berkeley would have us believe that this God that exists is eternal, and so the external world will always exist (as long as this God wishes it to). This argument from God may have been accepted in Berkeley's time, but it is far from sound, and thus far from being reasonable. In conclusion, it seems that no arguments for or against the existence of the external world are inferred with complete consistency. This could lead us to conclude that the only really reasonable view is ontological agnosticism with regards to the external world, however it seems to also be against sound judgement to live your life with no view whatsoever on such a matter. Thus it seems that the hypothesis that the external world exists is at least practically reasonable. ...read more.