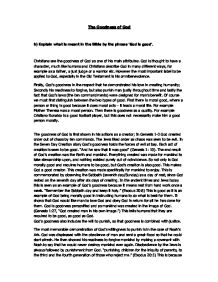 The Goodness of God

The Goodness of God b) Explain what is meant in the Bible by the phrase 'God is good'. Christians see the goodness of God as one of his main attributes. God is thought to have a character, much like humans and Christians describe God in many different ways, for example as a father, a just judge or a warrior etc. However the most important label to be applied to God, especially in the Old Testament is his omnibenevolence. Firstly, God's goodness in the respect that he demonstrated his love in creating humanity; Secondly his readiness to forgive, but also punish man justly throughout time and lastly the fact that God's laws (the ten commandments) were designed for man's benefit. Of course we must first distinguish between the two types of good. First there is moral good, where a person or thing is good because it does moral acts - it leads a moral life. For example Mother Theresa was a moral person. Then there is goodness as a quality. For example Cristiano Ronaldo is a good football player, but this does not necessarily make him a good person morally. The goodness of God is first shown in his actions as a creator; In Genesis 1-3 God created order out of chaos by ten commands. ...read more.

Socrates once said, "Consider this question: is what is pious loved by the gods because it is pious or is it pious because it is loved?" Christians adopted this to become, "It is good loved by God because it is good or is it good because it is loved?" Basically this is what is good, good because God commands it or does God command it because it is good? The Divine Command theory states that things are good because God commands them; so the Ten Commandments are good because they are what God commands. So in response to the Euthyphro dilemma, in the Hebrew Scriptures what the Jews understand to be good is good because it is loved or commanded by God - not for any other reason. God is seen as the ultimate source of moral authority and should be obeyed unquestioningly. This means that God may use fear to compel obedience in order to prevent the chaos that can occur when moral order is broken. "For God has come only to test you and to put the fear of him upon you so that you don't sin." All these examples show that God is seen to be morally good and skilfully good, a God who is ready to combine goodness with justice through punishment in order to keep moral disorder at bay. ...read more.

How can a hurricane or tsunami be affected by human behaviour? The free-will argument provides a counter to the above argument. The free-will argument denies that, 'by saying that while God abhors evil he allows it'. The free-will argument asserts that God's purposes for humankind cannot be achieved without allowing humans free will. God could not allow human free will without allowing for the possibility that they would choose to do evil. It goes on from there to say that 'His will is that they should freely choose...good' and that 'he is in no way responsible for the evil that there is.' The second type of theodicy is those which claim that God is not all-powerful or perhaps not all-loving. For example Process Theology states that the universe existed before God moulded it and therefore he can only control matter that exists inside himself. Evil is a process within matter and therefore God cannot control it. Eventually he will be able to overcome evil and control matter but until then he can only help humans as much as he can. Many object that such a God would be too limited to worship properly. So, to conclude, there are many examples of God's goodness throughout the Bible but it is difficult to believe in a God who is perfectly good because there are so many objections such as evil and severe punishment to the rules. ...read more.