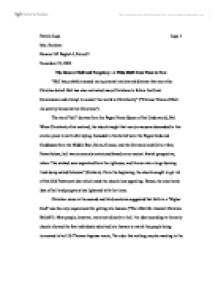 The Ideas of Hell and Purgatory: A Wide Shift from Then to Now.

Natalie Lupo Lupo 1 Mrs. Ponikvar Honors/ AP English I, Period 3 November 25, 2003 The Ideas of Hell and Purgatory: A Wide Shift from Then to Now "Hell has probably caused more personal anxiety and distress than any other Christian belief. Hell has also motivated many Christians to follow the Great Commission and attempt to convert the world to Christianity" ("Various Views of Hell: As seen by Conservative Christians"). The word "hell" derives from the Pagan Norse Queen of the Underworld, Hel. When Christianity first evolved, the church taught that nearly everyone descended to this similar place to earth after dying. Included in this belief were the Pagan Gods and Goddesses from the Middle East, Rome, Greece, and the Germanic and Celtic tribes. Nevertheless, hell was commonly envisioned based on an ancient Jewish perspective, where "the wicked were separated from the righteous, and thrown into a large burning trash dump called Gehenna" (Graham). From the beginning, the church sought to get rid of this Old Testament idea which made the church less appealing. Hence, the once harsh idea of hell and purgatory has lightened with the times. Christian views in the second and third centuries suggested that faith in a "Higher God" was the only requirement for getting into heaven ("The Afterlife: Ancient Christian Beliefs"). Most people, however, were sent directly to hell. An idea according to the early church allowed the few individuals admitted into heaven to watch the people being tormented in hell. St Thomas Aquinas wrote, "In order that nothing may be wanting to the felicity of the blessed spirits in heaven, a perfect view is granted to them of the tortures of the damned"("The Afterlife: Ancient Christian Beliefs"). A balance between all humans going to heaven and all humans going to hell Lupo 2 was needed, which theologians pondered in the years to follow. In the third century, when hell was considered an eternal punishment, Tertullian thought of a new place that he called the bosom of Abraham. ...read more.

The Catholic view claims that Purgatory ends for person when he or she has been completely purified. He or she can then be let into heaven. However, the level of torment can be reduced by friends and family if they offer masses or prayers ("Purgatory: History and Current Beliefs") The Vatican II documents state, "The doctrine of purgatory clearly demonstrates that even when the guild of sin has been taken away, punishment for it or the consequences of it has been taken away, punishment for it or the consequences of it may remain to be expiated or cleansed. They often are. In fact, in purgatory the souls of those who died in the charity of God and truly repentant, but who had not made satisfaction with adequate penance for their sings and omissions are cleansed after death with punishments designed to purge away their debt" Lupo 7 ("Purgatory: History and Current Beliefs"). The underlying information here is that individuals must be held accountable for their actions, even if they are forgiven. Consequences must be dealt with, and rituals according to the Catholic Church must be followed through with. When Princess Diana died in 1997, Queen Elizabeth received a letter of condolence from Pope John Paul II. "The Holy Father has offered prayers summoning her to our Heavenly Father's eternal love," read the letter (Walls). This quote hinted that Diana was in Purgatory, and that prayers would end her time of purging and allow her to rise up into heaven. On November 29th of the following year, the Pope issued a statement in "Conditions for Gaining the Jubilee Indulgence" describing how members of the Roman Catholic Church "can reduce or eliminate the interval in purgatory for themselves or loved ones through indulgences" ("Purgatory: History and Current Beliefs"). Refusing to drink, smoke, or eat for a period of time could help reduce time in purgatory, as well as visiting the sick, imprisoned, or elderly. ...read more.

Timothy George, dean of the Beeson Divinity School at Samford University in Birmingham, Alabama said "Heavenly happiness offers a better approach...than how hot it is in hell. We ought to focus on heaven and not lose sight in focusing on what the temperature is in hell. We ought not to lose sight of the alternative, which is eternity with God in heaven" ("The Afterlife: Current Beliefs of Major Wings of Christianity") . In essence, althought the bible has not changed, our beliefs in its teachings have. "In every generation, the church must interpret and apply the Scriptures in the context of contemporary culture if we are to be faithful to the text as it is meant,"said Reverend Stephen Happel, interim dean of religious studies at the Catholic University of America in Washington, D.C. (Sheler). Time has shown that a society will adopt the beliefs they are most comfortable with. "The gap between secular concepts of justice and the literal or metaphorical interpretation of biblical verses about hell can only widen with time" ("Conservative Christians' Views of Hell: Trends and Implications"). This gap was further widened by the fascination of spirituality by today's culture. "A change was detected in popular culture a decade ago with the public's fascination with angels. Angelical memorabilia, books, movies such as "The Preacher's Wife," and television's "Touched by an Angel." Jerry Miller, chairman of the philosophy department at Salisbury State University in Maryland suggested that "the result of such re-imaging is that religion loses some of its negative reputation for bullying people into submission" (Graham). Hell and purgatory are no longer popular ideas preached from the pulpit. It is a time of a lighter, more encompassing message. Hell and purgatory are left out of mainstream discussions with the topics Lupo 13 pertaining more to a God of love and acceptance than of anger, hell, and purgatory. "Basically . . .there is an afterlife. It doesn't necessarily take on the image of horns and red suits chasing people around" (Graham). ...read more.